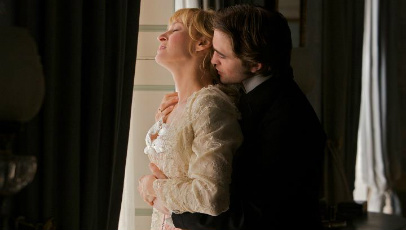 Georges Duroy (Robert Pattinson) is a peasant. Finding himself in Paris, he’s taken under the wing of old friend Charles Forestier (Philip Glenister), who lands him employment as a political writer and introduces him to three high society ladies: his wife Madeleine Forestier (Uma Thurman), Virginie Walters (Kristen Scott Thomas) and Clotilde De Marelle (Christina Ricci). Through means of seduction, betrayal and deception, Georges slowly rises from poverty to wealth, but it all comes at a price.

The concept of one man’s elevation to wealth and power through any means necessary is a fascinating one, and, perhaps with a screenwriter more attuned with Guy De Maupassant’s original novel, Bel Ami could’ve been a success. Unfortunately, Rachel Bennette’s screenplay is too light-footed and short on emotional resonance to enthral. No sooner are the characters introduced than they are thrown into fickle plot lines and forced to pronounce terrible lines in embarrassing ways.

Sadly, the way in which the narrative moves from scenario to scenario with little to no interest in the passage of time, leaves the audience uninterested in the characters’ various acts of debauchery, making what plays out seem more like a soap opera than credible feature film. There are some minor forays into more worthwhile avenues, including a subplot about politics, but barely any time is spent seeing how these could play out before they’re reduced to mere ways in which more acts of trickery can be performed.

Not only is the passive screenplay distracting, but so is the direction. Declan Donnellan and Nick Ormerod allow the events to unfold through long, wide-angled shots, which not only alienates the characters, but also makes the events of the film unfold with an air of inexactness, further adding to the breach between audience and what’s happening screen. While there are some nice touches in the production design, and from Odile Dicks-Mireaux’ sumptuous costumes, there’s an obvious lack of organisation and uncertainty on how to capture the novel’s essence that makes the film feel clunky, rather than seamless and flavoursome like it should be.

Pattinson, making a clear attempt to test his acting abilities, flounders as Georges. While his allure may be enough to entice those Twi-Hards into paying big money to watch him in the Twilight films, he simply doesn’t have the presence, experience or capability to lead a film of Bel Ami’s nature. Thurman and Scott Thomas – two highly regarded actresses – are shafted by the material, neither allowed to prove their worth or escape the one-dimensional characters which they inhabit. Scott Thomas, in particular, is reduced to a lap dog who bounds around the screen bewitched by Georges supposed sexual dominance, while Thurman is at least able to retain a strained poise as the devious Madeleine.

Thankfully, to the benefit of both herself and the film, Ricci copes with the cringe-inducing dialogue and ridiculous happenstances, delivering a potent performance as Clotilde. Ricci embodies her character with a welcomed effortless innocence and vulnerability. It’s almost as if she’s expressing her appreciation to the directors and screenwriter for entrusting her with such a small, dignity-saving role – one where she didn’t have to embarrass herself too much. Colm Meaney, Holliday Grainger and Glenister add some weight to proceedings, but their roles are too limited to allow for them to drum up much interest.

Unfortunately, while Bel Ami may be based on a well respected novel, any semblance of reflected honour is eradicated before the opening sequence is over. On the surface, this may pretend to be a lavish tale of passion and treachery, but Bel Ami is really nothing more than insufficiently directed codswallop in delectable costumes, with a starry cast who – perhaps with the exception of Pattinson – are worthy of much, much better.