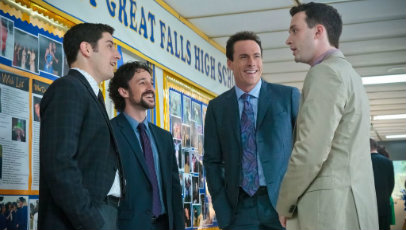 Having settled down into stale married life with Michelle (Alyson Hannigan), Jim (Jason Biggs) finds himself back in the company of his father, Noah (Eugene Levy), and former friends – Kevin (Thomas Ian Nicholas), Oz (Chris Klein) Finch (Eddie Kaye Thomas) and Stifler (Seann William Scott) – for their high school reunion. Unable to control himself, Jim is propelled back into his former life – something that proves problematic for his relationship with Michelle.

Eight years after audiences were first introduced to these raunchy teens, they’re back, only this time as awry adults and now under the control of new writer-directors, Jon Hurwitz and Hayden Schlossberg. As if nothing has ever changed, the duo almost immediately abandon these characters’ matured sensibilities, throwing them back into the mindless situations they’re known for. This is clearly the easy route, allowing the filmmakers the opportunity to re-hash old territory, so it can’t help but feel like an outdated and all too easy cop out.

As the first act plays out, we’re reintroduced to each of the main characters. Clearly, we’re supposed to care about their respective problems, such as Jim and Michelle’s lack of a sex life, or how Kevin feels emasculated by his wife, but it only ever feels awkward, muted and bland. These characters have potential to be interesting when they aren’t screwing around, but Hurwitz and Schlossberg’s writing doesn’t reflect that. They only seem interested in making another American Pie film, rather than investing the time and effort to fashion a worthwhile comedy, engaging in its own right.

That’s not to say American Reunion is entirely devoid of comedic moments, because it’s not, and proven scene-stealers Biggs, Scott, Levy and an ever-dependable Jennifer Coolidge as Stifler’s mom are each allowed their own opportunity to re-affirm their comedic chops and show that they all deserve better material than they’re having to work with. But it’s not enough, as the rest of the cast are simply left to linger in the background, which only makes their screen time all the more cringeworthy and pointless (case in point Tara Reid as Kevin’s ex-girlfriend Vicky).

Perhaps there was never potential for a new American Pie film to rise above its predecessors’ foul-mouthed, sex-obsessed aptitude, but there was always hope that American Reunion would make use of its potentially adult-friendly direction and offer a new take on these hapless characters. Unfortunately, this isn’t the case, and, whether you like it or not, American Pie films will forever be American Pie films. And, while there’s nothing wrong with something doing what it does best, American Reunion neither represents these characters or their capabilities at their best, nor does it showcase Hurwitz and Schlossberg in particularly capable light.