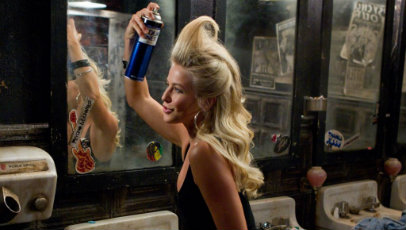 Sherrie (Julianne Hough) arrives in Los Angeles as an incautious dreamer. However, when she’s mugged and left with only $17 to her name, she’s left dishearted by the place she’s dreamt of since her tender years. Thankfully, she’s saved by the equally ambitious Drew (Diego Boneta) and lead to steady work at the famous Bourbon Rooms. However, when the Mayor’s wife (Catherine Zeta-Jones) starts scheming to shut down the rock ‘n roll venue for good, her idol – the singing icon Stacie Jaxx (Tom Cruise) – loses his way, and other challenges present themselves, Sherrie realises she still has a lot to learn.

A former Broadway stageshow, Rock Of Ages has been brought to the big screen by musical mogul and upcoming filmmaker Adam Shankman, the man responsible for casting John Travolta as a woman in Hairspray. Where its live equivalent likely benefited from a cheesy and uncomplicated attitude, the fact that the screenwriters – Justin Theroux, Chris D’Arienzo and Allan Loeb – have clearly made no attempt to add depth or even expunge elements those that feel unnecessary has resulted in a film that, more often than not, feels overlong, hollow and populated by too many meaningless characters and plot threads.

It’s a shame, as there’s an obvious layer of heart and soul buried beneath the bumph, whether its in the overriding theme of love or the fact that, no matter how hard people – or life in general – try to corrupt us, we must remain true to our dreams and own selves. But, in the end, thanks to the shambolic nature of the narrative, the enjoyability and investment hinges so much on the musical numbers, and whatever influence the varying actors can infuse into their thinly formulated personas, that the pieces of ‘plot’ that lie in between do very little to either maintain or, heaven forbid, deepen investment.

As leads, Hough and Boneta have neither the experience, nor the allure to to engage the audience or to make them care about their enormously foreseeable narrative arc. Hough comes off a little stronger than Boneta, mostly due to her boundless vitality, but it’s not enough when faced with a script as weary as this one. Cruise comes off best as the carefree, yet exploited Stacie Jaxx, while Alec Baldwin as The Bourbon Club’s headstrong owner, Russell Brand as his cocky assistant and Malin Åkerman as a easily led Rolling Stones reporter do commendable work. Zeta-Jones and Paul Giamatti as Jaxx’ slimy manager, however, feel much too awkward and miscast as their shamefully underwritten respective characters.

Of course, for anyone simply looking for a buoyant, trashy throwback to the 1980’s, laden with innumerable sentimental musical tracks, then Rock Of Ages delivers this in the droves. The main problem is that, once the film has settled into its steady rhythm, its writers never try to elevate it above the norm. This results in an experience that, while enjoyable at the time, doesn’t offer anything more permanent – except for an unavoidable sense of dissatisfaction. When a film intent to evoke mass nostalgia misses its mark, not even an unusually on-form Cruise can save it from mediocrity.