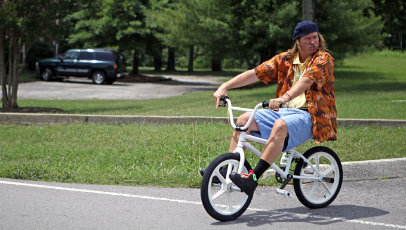 The Fourth Dimension is an anthology piece comprised of three short films contributed by three different directors – Harmony Korine, Aleksei Fedorchenko and Jan Kwiencinski. Spearheaded by Vice Magazine’s Eddy Moretti and partly funded by Grolsch Film Works, The Fourth Dimension sees each director tackling the open-ended concept of the fourth dimension – the next, higher existence of your soul – in their own unique ways, while adhering to a set of strict rules and precepts.

Kicking off this oddball collection is Korine, arguably the most well-known of the three. His segment, titled The Lotus Community Workshop, sees Val Kilmer playing a scruffy, rapturous version of himself who uses his “skills” to reach out to others as a motivational speaker. Using Kilmer’s persona as his interpretation of the fourth dimension, Korine mixes unusual, yet effective sound effects and strobe lighting to effectively blur the already faded line between reality and fantasy, leaving the audience in almost entirely in the dark.

Kilmer revels in the opportunity to play such a free-wheeling, uninhibited version of himself – one who would declare various nonsensical remarks, yet deliver them with such urgency and determination that they appear to be true. At one point, he even utters that the world is “like cotton-candy”. And that’s precisely what The Lotus Community Workshop is, like a multi-coloured and inscrutable type of cotton-candy. The fact Korine’s section is more restrained than his previous work can predominantly be explained by his lack of inclusion in the writing process.

Fedorchenko’s insertion, Chronoeye, about an unacquainted scientist, Grigory Mikhailovich (Igor Sergeev), who lives and conducts various experiments from his run down apartment, is easily the most accessible of the three, yet not exactly the most satisfying or logical. Thinking he has a way to observe moments from history, Grigory installs a piece of machinery on a concrete mast and, despite his obvious lack of income, sets several monitors around his apartment. Unfortunately, the sights that emerge from the monitor are invariably from a different perspective to what he’d hoped and limit what parts of the past he’s able to view.

Infused with a will-they-won’t they love story between Grigory and his annoying, danceaholic neighbour, Chronoeye boasts an intelligent conceit that, due to Fedorchenko’s plodding narrative and Sergeev’s lack of ability to imbue Grigory with an understandable, invest-worthy standard of morality, falls flat on its face and ends up being a tedious and uninteresting snapshot into the lengths one man will go to in order to  reject the advancement of the future and acquire an all-encompassing knowledge and insight into the past.

The final instalment, newcomer Kwiencinski’s Fawns, centers on four twentysomethings – Philip (Pawel Smagala), Mickey (Pawel Tomaszewski), Pace (Tomasz Tyndyk) and Koko (Justyna Wasilewska) – as they spend their last days on Earth wreaking as much havoc as possible, after a massive flood has consumed much of the world. Living life outside the boundaries set upon them by society, the foursome are seen to have no limits in what they’ll do for a bit of “fun”.

While effective in its ability to present four people set free by the forthcoming apocalypse, Fawn is at its best as the free spirits become less obsessed with causing destruction and more interested in redeeming themselves – a signifier that they’re wanting to better their chances of survival rather than simply letting loose. It’s much too slow, though, and is decidedly unfocused and useless if taken on face value.

When touching upon each of their ideas of the fourth dimension, each short comes to life, but they’re too surreal and out there to appeal to the masses. It’s not necessarily the manifesto’s fault that The Fourth Dimension fails in its ability to drum up a thought-provoking piece of cinema that tries to decipher an already elusive concept as there’s been anthologies like this before that force several directors to adhere to rules (Dogme 95 being the most successful and acclaimed), but more to do with the fact the three segments are individually flawed and, as a collection, incompatible and weak in their assertions.