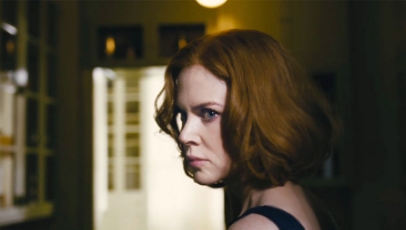 Renowned world over by critics and audiences alike for his Vengeance trilogy (Sympathy For Mr. Vengeance, Oldboy and Sympathy For Lady Vengeance), Korean director Park Chan-Wook makes his English language debut with Stoker, a brooding psychological thriller rooted deep in the gothic. It’s written by Prison Break alum Wentworth Miller and boasts many of its directors trademarks: ravishing visuals, strong performances and a deluge of tainted motifs.

Shocked by the sudden, unexpected death of her father, India Stoker (Mia Wasikowska) resigns herself to the solitary home life she shares with her unstable mother Evelyn Stoker (Nicole Kidman) in their remote estate. However, when India’s obscure Uncle Charlie (Matthew Goode) arrives on the scene and begins to assume her fathers position, the mood is severely altered. As India attempts to discover his true colours, she slowly becomes more and more infatuated with him and his dark underside.

The script – chosen by Park Chan-Wook himself after being included on the 2010 Black List of best unproduced screenplays – explores a hefty range of themes, from sinister secrets and repressed sexuality, to incest and strained family politics. Miller sticks to a uncluttered narrative formula, forcing many of these elements to bubble ferociously under the surface as the three characters tussle for power. This is matched through the terse, suggestive dialogue that’s delivered so well by the leads.

It’s a restrained, mind over matter approach that, while ultimately leaving the film lacking in depth (there’s nothing here to properly sink your teeth into, which will likely leave many underwhelmed), keeps the audience on the knife edge of its impressively maintained sense of foreboding tension as the secrets surrounding Uncle Charlie’s personality and presence are slowly pieced together by India, and she herself experiences a formidable transformation.

The leads each position themselves well, with Wasikowska and Kidman both delivering admirable, subtle performances. But this is Goode’s film, and he’s terrific as Charlie: a Hitchcockian figure of both trepidation and allure, signified through the manoeuvring, conflict-inducing relationships he harbours with both India and Evelyn. This brings to light the idea of masculine power and how someone with such unwavering physical purpose can alter people so drastically.

The final act will come as something of an anti-climactic misfire considering the build up that leads to it, yet this shouldn’t be allowed to diminish what preludes it. Using Miller’s script as a template, Park Chan-Wook has used temperate, watchful direction, the vacillating tension between his leads and Clint Mansell’s evocative score (a scene of percolating sexual chemistry between Indie and Charlie is superb) to create a skilful psychological thriller that’s perhaps more curious than it is exceptional.