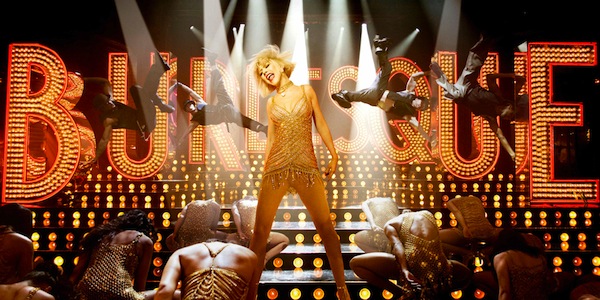 Burlesque is a predictable and cliched musical drama from writer-director Steven Antin.

The film centres on Ali (Christina Aguilera), a small-town girl who moves to L.A. and finds her place singing and dancing in a burlesque club run by a former dancer, Tess (Cher).

Antin’s script is utterly brain dead from the offset, devoid of any life or real character development and too heavy on inane cliches and much-too-obvious stereotypes. The dialogue is as insipid as the actors fumbling to deliver them.

On the subject of acting, Aguilera, in her first feature-film appearance, is forgettable as the wannabe Ali, while supporting actors in the form of Stanley Tucci, Cam Gigandet and Kristen Bell are left underdeveloped, despite their attempts at injecting some much-needed life and humour into the deplorable attempts at drama.

The strength of the film, therein, lies in the musical and dance numbers. If nothing else, it proves Aguilera has a powerful set of lungs, and even allows Cher the chance to make a low-key comeback with a pair of performances that, surprisingly, evoke the most emotion out of the whole production.

All in all, if it’s mindless entertainment, music and show-stopping dance numbers you’re after, then Burlesque may just be for you. If, however, you’re looking for an engaging narrative and characters you can emote with, try elsewhere.