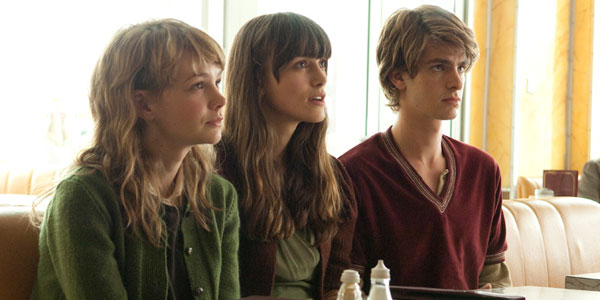 As children, Ruth, Kathy and Tommy (played by Ella Purnell, Izzy Meikle-Small and Charlie Rowe), spend their childhood at Hailsham, a seemingly idyllic English boarding school in the English countryside for children who are special.

As they grow into young adults (played by Keira Knightley, Carey Mulligan and Andrew Garfield), they move to The Cottages and find that they have to come to terms with the strength of the love they feel for each other, while preparing themselves for the haunting reality that awaits them.

Ishiguro’s gentle sci-fi concept is executed with sombre subtlety by Romanek and, despite Alex Garland’s sometimes too methodical screenplay, preserves an eerie sense of mystery and discerning dubiety in its translation to screen. These elements, in a bid to keep the film realistic, are wisely buried within a wholly human story, one about love, loss and empathy.

Romanek’s successful direction is highlighted in the great care he has for the source material and the characters that inhabit it. His remarkable skill comes to light in the way he presents the dystopian British countryside as beautiful yet bleak. It perfectly juxtaposes the beautiful lives everyday people lead with the bleak lives lead by the donors.

The three central performances are equally astounding, each superbly displaying repressed desperation and their desire to achieve true happiness. Mulligan’s exquisite beauty and incandescent quality make her perfect as Kathy, confirming her newly won status, while Garfield is undeniably arresting as the troubled Tommy.

Knightley, who is left with the trickier role, hits the right notes of disdainful faux-sophistication, holding her own as the vindictive Ruth, the manipulative force of nature who interferes with the lives of Tommy and Ruth.

The supporting actors – Charlotte Rampling, Sally Hawkins, Nathalie Richard, Domhall Gleeson and Andrea Riseborough – hold their own against the powerful trio. Though none of them has much screen time, they all play their characters with conviction and restraint, further accentuating the central themes of loneliness and longing.

Rachel Portman’s etherial score, almost a character in itself, penetrates your heart, in a pondering, beautiful way that compliments, and often surmounts, the heart-rending narrative.

The only issue is with the sometimes irritatingly slow pacing, and the disproportionate narrative that works against audience involvement. This, however, isn’t necessarily a bad thing, especially considering the realistic and sinister themes the film explores – and is excellently concealed by the fantastic performances.

Never Let Me Go is not only a beautifully explorative, acted and directed piece of filmmaking, but a masterful adaptation and glorious cinematic achievement.