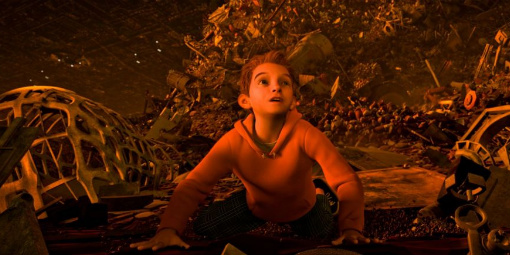 The film centers on Milo, a young boy who gains a deeper appreciation for his mum after Martians come to Earth and take her away to harvest her mothering prowess for their nanny bots.

Simon and Wendy Wells have penned a screenplay that is so devoid of magic and charm that it ultimately lacks an engaging narrative, three-dimensional characters and any humour. It often resorts to thrill ride antics, detached action and a lot of racing around in the desperate hope of evoking some enjoyment, but falls flat on its face in the process.

Aside from attempting to convey a very well hidden message about children devoting more time and attention to their parents, it’s an altogether impersonal experience. The script, by never allowing enough time to get to know Milo and his mum – or any other character for that matter – on a personal basis, has clearly been brushed aside in favour of these so-called more realistic digital imager effects.

Due to the digital obsession, the characters are extremely unlikeable. Behind the revolutionary motion-capture technology, they feel too simplistic and superficial or, in more simple terms, totally dead behind the eyes to emote with.

Seth Green, Dan Fogler and Joan Cusack provide respectable voice-overs, but aren’t distracting enough, or able to transpose enough of their personality and passion to bring the dialogue and concealed heartfelt message to life.

The motion-capture animation, which has been implemented by Zemeckis before on The Polar Expess, is worse than ever. It’s hard to remember that a visionary director such as Zemeckis was responsible for such instrumental films as Back to the Future and Who Framed Roger Rabbit?, when we’re bestowed with such nonsense.

The 3D is unnecessary and, along with the bland, dark and unattractive cinematography, makes Mars looks like a dreadful planet, somewhere you’d desperately want to avoid at all costs.