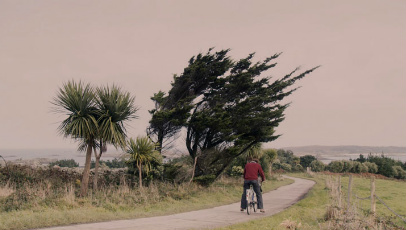 The film follows an upper class family and their holiday on Tresco, Isles of Scilly. Patricia (Fahy) calls together daughter Cynthia (Leonard) and son Edward (Hiddleston) for some quality time before Edward embarks upon a volunteer placement in Africa While their father appears only over phone calls, he casts an unseen presence on the characters’ development. With hired cook Rose (Lloyd) and family friend Christopher (Baker), the family’s relationships soon begin to strain, and its foundations are tested and tortured as the holiday continues.

Filmed on location, the weather, natural lighting, and the raw, irresolute environment perfectly echo the family’s turbulent relationships, switching from light optimism as they initially gather to a dull grey monotone when they eventually depart.

In long, static takes, full of wide shots which dare to linger and embrace the awkwardness, Hogg delicately exposes the chasm between polite pretences and repressed animosity.

The script exquisitely fluctuates between the brutally comic and the frustratingly trivial actions. Some may find it uncomfortable, but Hogg instills the right amount of indignation to keep the audience emotionally invested throughout, taking her time to carefully examine each character, as well as the family dynamic as a whole.

The acting itself, in particularly from Hiddleston, is superb, with all the actors committing admirable and earnest performances as their respective emotionally disconcerted character, each at different stages in their lives.

Most of the dialogue and character interactions are improvised, relying on staging, body language and the vapid conversations to further the narrative, which in turn give the family’s relationships a wonderfully authentic nature.

Ed Rutherford’s score is impeccable, seamlessly integrating with the films low-key style, helping to accentuate the unsettled relationship at its heart, and the unsaid words lingering between them.

All these elements make Archipelago a wonderfully raw, realistic and inquisitive study into family life: the ups and downs, the turmoil, the repressed emotions and the subtle moments of joy. It’s a truly superb and accomplished piece of filmmaking that, while not being to everyone’s tastes, certainly proves that Hogg is one of the most visually daring and unique British directors in recent years.

Some may find it deplorable and and utterly pointless, while others will cherish it and savour every moment. I, on the one hand, find myself in the second category.