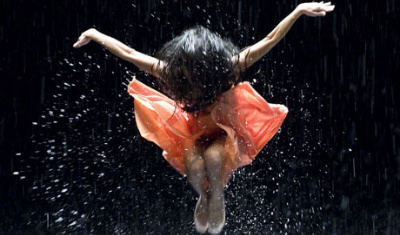 The film is centered on four of Bausch’s most celebrated choreographies – Cafe Müller, The Rite of Spring, Vollmond and Kontakthof – intercut with personal memories of Bausch, related by various members of her international dance company Tanztheater Wuppertal. Wenders’ central focus, however, remains on the dances, bravely leaving Bausch herself as an elusive and mysterious figure.

The various dances – both newly filmed and presented from archive footage – are captured by Wenders in incredibly bold, enthralling and hugely cinematic ways. Whether it be indoors on the theatre stage, or outdoors – at traffic intersections, in parks, or on the monorail – Wenders uses bold cinematography to present viewers with a closer look at the beauty of Bausch’s unique vision.

The spellbinding fusion between dance and documentary proves dance as an incredibly evocative and powerful piece of cinema. By infusing the movements with 3D, Wenders shows that the spatial relationships on the stage can speak to people in different ways, giving us a all together better insight into Bausch’s work. Shots are composed, through vibrant colours or endless perspective, to ensure they make true sense in 3D: opting for the conventional 2D would be missing the point entirely.

As a novice myself, the experience was truly eye-opening: a beautiful and enthralling tribute to Bausch.Instead of employing 3D technology in an attempt to take focus attention away from the under-developed narrative like many recent films, Wenders uses it very carefully, only to accentuate and express the realism of dance. It may well be the best 3D film I’ve ever had the pleasure of seeing.

To Wenders, cinema is an ongoing experiment. Pina 3D, whether you’re a dance lover or complete novice, wonderfully highlights this in a way that opens Bausch’s work up to a whole new audience, while never ignoring or sidelining Bausch’s die-hard followers and collaborators. It’s a truly majestic and enterprising piece of expressionist cinema.