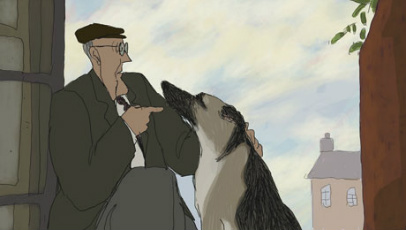 My Dog Tulip is based on the 1956 book of the same name by acclaimed author J. R. Ackerley, and tells the story of an elderly bachelor’s bittersweet relationship with his German shepherd.

The narrative both humorously and touchingly details the life that Ackerley and Tulip have shared – from her disdain of social interactions to his persistence in finding her a partner to breed with. It’s both charming and wholly matter of fact about the pair’s relationship, refusing to anthropomorphise Tulip in the way that has become all too fashionable recently. This ensures that their bond is always at the centre of the film, and keeps it feeling very authentic.

Paul and Sandra Pierlinger’s animation, done entirely on a tablet device, has a hand-drawn, rustic quality that exudes charm and love throughout. By keeping the animation minimal and sketch-like, the film represents Ackerley’s writing and temperamental thought process to wondrous avail. The mix between colourful scenes and black and white interludes is beautifully realised, visually separating the past from the present.

Christopher Plummer’s soothing and relaxing narration compliments the daydream-style animation perfectly. He nails the world-weary and lonesome nature of Ackerley, whose relationship with Tulip provides his only sense of life and love. Lynn Redgrave, who plays the meddling sister, also provides excellent voice work, though her contribution is disappointingly small.

If there’s a criticism to be noted, it’s that the film feel over-stretched at its 83 minute running time. If only the filmmakers had condensed the narrative to fit a 20 minute short, and perhaps avoided focusing the majority of the narrative on Tulip’s sexual frustrations, then it could have been quite extraordinary.

Still, these are minor disappointments, and My Dog Tulip is a marvellously animated and affably observed portrait of the devotion between one man and his dog – something that has been shamefully belittled in the past. It’s a film that deserves to be commended for it’s courageousness.