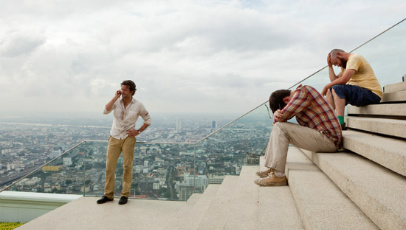 Now, two years later, the inevitable sequel has arrived. The Hangover Part II finds Phil, Alan and Doug setting off to Thailand for Stu’s supposedly safe, subdued wedding. However, things don’t go as planned after they lose the 16-year-old brother (Mason Lee) of Stu’s fiancee (Jamie Chung) and somehow wake up in Bangkok.

Once again, Phil, Stu and Alan try to piece together the previous night and find their  missing friend. It’s not an easy task though, as they encounter a number of ludicrous complications – from a silent monk to an international arms deal.

Unlike last time, when the scenarios felt fresh, exciting and wholly comical, the spark of originality has dissipated, leaving a uneven narrative that relies all too heavily on both sight gags – Stu’s tattoo and Teddy’s missing finger – and shock value – Stu’s encounter with a transexual prostitute – to score some of its bigger laughs.

Similarly, the obstacles feel staid in comparison to the freewheeling nature and ridiculousness that made the first one so unexpectedly brilliant. The fact that nothing new is offered to shake up the formula feels like a massive mistake, and the film falls flat on its face from the off.

It’s a relief, then, to see that the chemistry between the leads is still fully intact. It’s an achievement in itself to get all the actors to agree to a sequel, all the more so when they gel together as successfully as Cooper, Galifianakis and Helms. The only problem is, due to the irregular structure of the narrative, their characters have been dialled up to an almost unbearable level. After half an hour, this stops being entertaining and begins to vex.

While Galifianakis’ Alan was the prized star of the first instalment, he appears to have since regressed, becoming borderline mentally challenged. Of course, his haphazardness raises a few smirks along the way, but he never hits the same highs he did in the first.

Helms, on the other hand, takes the film from under Galifianakis’ feet and runs with it. He strikes the perfect balance between madcap lunacy and straightforwardness that makes Stu so appeasing and ultimately relatable. Cooper’s Phil is basically the brains of the pack – an averagely realised counterpart to their absurdity.

The first films absentee, Doug, adds nothing but a sense of relief to the Bangkok craziness, while Ken Jeong, whose Mr Chow is back in a more predominant role, doesn’t have the intermittent flavour he achieved so well the first time around. His camp and mischievous personality is too eccentric, and ultimately jarring, to warrant his increased presence.

There were also two cameo performances – one that wonderfully re-energised the sagging middle segment and another that could result in eyes being clawed out.

Phillips directs with a slick, loose attitude that’s perfectly in sync with the vicarious complications the trio encounter, but without the workably unhinged script of the first film to back it up, it never feels as pleasing or imaginative as it thinks it does.

As enjoyable a viewing experience as it is, The Hangover Part II doesn’t have the substance or breezy nature that made the first film so accidentally brilliant, and ultimately feels like a inadequately executed rehash.

But hey, at least it’s better than Due Date…