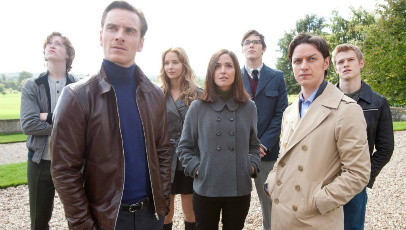 Synopsis: When the CIA discovers the existence of Mutants, telepath Charles Xavier (James McAvoy) is charged with recruiting a team to oppose the evil mutant Sebastian Shaw (Kevin Bacon) and the mysterious Hellfire Club. But not all of Xavier’s team share his vision of peace with humanity as the powerful Erik Lehnsherr (Michael Fassbender) becomes convinced of mankind’s intolerance of Mutants.

X-Men: First Class is 20th Century Fox’s chance to start over with the X-Men franchise, to iron out the creases and resolve the sour taste that the critically panned X-Men: The Last Stand left in viewers’ mouths. Thankfully, by bringing on board Kick-Ass director Matthew Vaughn and a crack team of screenwriters – including Vaughn’s Kick-Ass counterpart Jane Goldman – X-Men: First Class has truly reinvigorated the franchise. It has adapted, evolved and and, most importantly, re-imagined itself, rather than living in the shadows of Bryan Singer’s original X-Men franchise.

The script is tight and fast-paced, with very few dull moments throughout and, instead of focusing too heavily on big budget action set-pieces, Goldman and co. instead opt to create a more intimate character piece, knitting each one into the thoroughly realised 1960’s world. The ensemble characters’ passages are handled with such care, and intercut with such genuinely terrific yet retrained action sequences, that they don’t feel bogged down or too developed for their own good.

Instead, the film and its characters are set up in a timely and neat manner, before the focus quickly shifts to the tempestuous relationship between Charles and Erik, and urgent stoppage of Sebastian Shaw. Of course, this means that some of the supporting characters aren’t as explored as others – Emma Frost (January Jones) and Moria McTaggert (Rose Bryne) are two that instantly come to mind – but these are minor quandaries, and something that audiences have come to expect from comic book adaptations through the years.

Vaughn’s direction compliments the script wonderfully, and he impressively adapts to the kinetic adventure tone after the hardcore and R-rated blood-fest that is Kick-Ass. Through his enthusiastic eye, X-Men: First Class exudes charm, wit, excitement and moments of indubitable terror. What’s most impressive is the wonderful way in which he infuses all these different elements, enhancing the overall enjoyment of the film rather than simply letting it becoming too complicated for viewers to understand. Similarly, despite being set amidst the Cuban Missile Crisis, it manages to avoid tangling itself in a web of political inquisitions, remaining light, level-headed and to the point for its entire running time.

In terms of acting, McAvoy, Fassbender,  Bacon and Jennifer Lawrence, in particular, immerse themselves in their respective roles, while Bryne and Nicholas Hoult do their best with their limited screen time. McAvoy and Fassbender are the undeniable nucleus of X-Men: First Class, with both exquisitely conveying the push-pull relationship between Charles’s quest for world peace and Erik’s attraction to evil. It is, essentially, a friendship between two men who know they need each other, but who are pulled apart by the different aims they possess.

Lawrence, in her first mainstream Hollywood role, holds her own as Raven/Mystique, bringing a remarkable level of susceptibleness and sobriety to her shape-shifting alter-ego, while Bacon is able to truly shine as the films central villain. Bryne and Hoult, despite being used so sparingly, both inhabit their roles with equal flavor, and we can only hope they are used more centrally in future X-Men instalments so they can prove their worth.

Some of the supporting cast, however, including, but not limited to Jones, Jason Flemyng and Lucas Till simply don’t have the necessary instruments to hold their own against such a heavyweight principal cast and are essentially brushed to to the side – though, in some ways, this is to the film’s merit.

Unfortunately, some precarious special effects – perhaps due to the time restricted post-production schedule – and an uneven middle act prevents X-Men: First Class from hitting the giddy highs some were anticipating. Even so, it’s a remarkably cohesive and assured origin story that deserves to be treasured and adored for its valiance and entertaining dexterity. All that’s left to say is, bring on X-Men: Second Class.