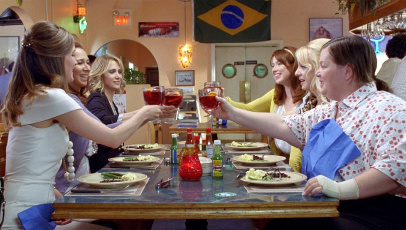 Synopsis: Annie‘s life is a mess. But when she finds out her lifetime best friend is engaged, she simply must serve as Lillian‘s maid of honor. Though lovelorn and broke, Annie bluffs her way through the expensive and bizarre rituals. With one chance to get it perfect, she‘ll show Lillian and her bridesmaids just how far you‘ll go for someone you love.

Though billed as the female counterpart to Todd Phillips’ massively successful The Hangover, Bridesmaids towers over the male orientated crass comedy in every sense of the word. Paul Feig, with the help of the writers and the entire cast, manages to create a film that not only subverts the predictable female comedy genre, but also brings a level of sincerity and nuance to a formula that has become so predictable and stale in its recent years. It’s fresh, exciting and almost completely original.

Kristen Wiig and Annie Mumolo’s well-crafted screenplay strives to keep away from the obvious clichés, instead presenting us with a female ensemble comedy that is incredibly mature, well paced, and strikingly played by all involved. It is, however, also one that knows when to have a laugh at itself: most notably in the wonderful dress-fitting and aeroplane scenes which, though a little contrived, are two of the funniest moments of cinema this year.

What’s most important, though, are the performances. Wiig, in her first lead role, thrives as Annie, proving her unquestionable comedy chops. She’s charming, sympathetic, wacky and completely believable as the naive yet quick-witted Annie. Rose Byrne plays Lillian’s new best friend Helen – Annie’s jealousy inducing opposite. She uses the role to prove her maneuverability as an actress by playing someone a little more unpredictable and improvised than she’s used to, and she absolutely nails it.

The rest of the cast, including Maya Rudolph as Lillian, Melissa McCarthy as Megan (who is, at times, utterly priceless), Wendi McLendon-Covey as Rita, Ellie Kemper as Becca, Jill Clayburgh as Annie’s mum, Chris O’Dowd as Nathan and Jon Hamm as Ted, are equally as entertaining in their respective roles. McCarthy and O’Dowd in particular, who are more used to TV roles, show their ability to mould into comically charged characters and hold their own against other more versatile and established actors. Bridesmaids is very much a team effort, and that’s what makes it work so well in comparison to other films of its nature.

If there are any criticisms to be made, it’s that at a hefty 125 minutes, Bridesmaids can feel, at times, a little too drawn out in places and could have benefited from a slight trim here and there. Similarly, with a cast as extensive as this, some actors are shamefully underplayed or, in the case of McLendon-Covey’s Rita and Kemper’s Becca, almost completely tossed aside halfway through. These, however, are minor issues and, in the bigger picture, seem relatively non-existant.

Bridesmaids is a truly hilarious ensemble comedy, with some of the best writing, performances and direction you’ll see all year. Find it, see it, love it.