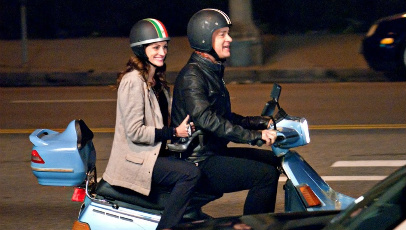 Synopsis: When appealing everyman Larry Crowne (Tom Hanks) is inexplicably fired from his job as a big box store clerk, he realizes it’s time for some meaningful change in his life. Deeply in debt and without direction he returns to college, where he befriends a group of scooter-riding students and eventually develops a real affection for the beautiful Mercedes Tainot (Julia Roberts), the instructor of his Speech class.

The premise is an interesting one which highlights some genuinely valid and thought provoking questions, relating to the credit crunch, middle aged dating and returning to education. While intriguing at first, the main problem with Larry Crowne is that it simply abandons every interesting aspect and point of intrigue, leaving whole plot strands unresolved. This can mainly be attributed to the flawed screenplay, co-written by Nia Vardalos (recipient of an Academy Award for the screenplay of My Big Fat Greek Wedding) and Hanks himself. More often than not, it resorts to modern rom-com cliché, rendering the narrative implausible when it does manage to touch upon more relevant and thought-provoking ideas.

In this respect, coupled with the feeling that when plot strands are tied up, they are done so in such a relaxed manner as to make them feel unnecessary and completely artificial, it’s evident that there’s not much at stake within the narrative. The audience is left feeling nothing towards any of the characters – especially Larry and Mercedes. Vardalos and Hanks are evidently more interested in tying their romance up in a neat little digestible bow, losing it’s inherent uniqueness along the way. It descends into a nondescript, pointless bore. The only character arc that sees some genuine development is that of Larry’s wacky friend Talia, played by Gugu Mbatha-Raw, who follows her passion and helps Larry become less inhibited.

Hanks’ direction is much the same as his narrative: artificial and almost entirely blasé. He opts for a grainy tint that clouds the film in a subdued and depressing air. Hanks’ intention may have been to make the story and its characters seem more lifelike and relatable, but it ultimately doesn’t work, often making everything seem overly drab and ugly. It’s almost as if the director himself doesn’t know the best way to present the story and characters.

In terms of his acting, Hanks embodies Larry with a honest and likeable nature. It’s in his relationships with his co-stars that he falters. The burgeoning “will-they, won’t-they” relationship between Larry and Mercedes, though believable, never feels entirely sincere. The chemistry comes across as more an unlikely friendship than a full blown, predestined love. Similarly, his awkward father-daughter companionship with Talia comes across as well intended and slightly humorous, especially in the way she butters him up in an attempt to release his charming side – but it’s all too flat and unexplored to have any particular meaning.

Roberts doesn’t fare much better than Hanks. In all her years as an actress, she’s played characters like Mercedes many times – all to much better effect than is on display here. Sure, she’s attractive, easy enough to watch and brings an alluring warmth to any character she plays, but she doesn’t make a full enough transition from Roberts the A-list actress to Mercedes the college professor that warrants any significant emotional investment or interest in her backstory. She simply exists as herself trying to play someone else, in an overly obvious fashion that become distracting as the film wears on. It’s a shame, as it’s simply more evidence that her career isn’t as inspiring and award winning as it once was.

The supporting cast is made up of a zany collection of weird and wonderful actors and actresses, from the respected and well cast (Taraji P. Henson and Bryan Cranston) to the nondescript and uncomfortable background commodities (Cedric the Entertainer and George Takei). Takei in particular feels completely unsure what the hell he’s doing there – much like how the audience will react when he first appears on screen.

That said, despite the fact it plods along at a snail’s pace and doesn’t reward its audience’s investment, Larry Crowne’s saving grace is that it’s inoffensive, easy to watch, and subtly charming. In other words, it exists for easy consumption, mindless romantic entanglements, and its attractive, mass-audience grabbing stars.