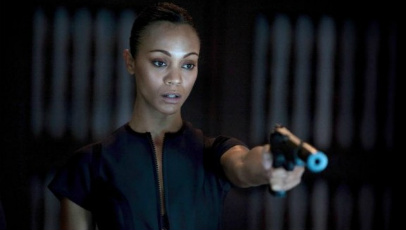 Generic and unequivocal, Besson and his fellow screenwriter Robert Mark Kamen have constructed an uneven, overwrought screenplay, plucking ideas from other films in the genre and piecing them haphazardly together in the hope that an idealistic action-thriller will be formed. Sub-plots that deviate from the action-heavy sensibilities – for example Cataleya’s relationship with artist Danny Delanay (Michael Vartan) – are painfully underdeveloped and lack the emotional resonance required for audiences to make any connection with the material or characters in question. All in all, the screenplay resembles a jumble of contrivances and cliches.

On the other hand, the action set pieces are admirably directed by Olivier Megaton. These skilfully executed scenes prevent Colombiana from being the disastrous flop that was expected, but are relied upon too heavily. Key plot details are surrendered, and the film reverts back to conventions all too typical in this hard-to-nail genre.

Saldana tries her best with what she has to work with, delivering, at the best of times, an accomplished yet off-colour performance as the ultra sexy and extremely efficient Cataleya. Disappointingly though, the writers’ avoidance of any significant non-action scenes, coupled with Megaton’s interest in objectifying Saldana in the skimpiest of skimpy outfits, limits her overall impact and ability to form an understandable and emotive character.

Colombiana fails to make good on its potential, instead becoming a tired, paint-by-numbers action-thriller that wastes Saldana’s obvious passion and natural flare for the genre, as well as heralding a new low for the once peerless Besson.