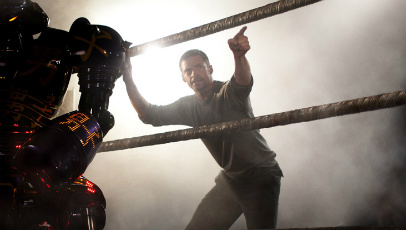 Part futuristic robot boxing drama, part redemption story between a father and his long-lost son, Real Steel – based on Dan Gilroy’s short story and unsurprisingly executively produced by Steven Spielberg – excels at one, but flounders on the other.

Washed-up former boxer Charlie Kenton (Hugh Jackman) has found a new calling in the form of steel robot fighting. When his robot loses, and he nears rock bottom, he reluctantly reunites with estranged son Max (Dakota Goyo) to rebuild and train a potential championship heavyweight robot. As the stakes rise, Charlie and Max rediscover their similarities and get one last chance at conquering their contemporaries.

Sure, it’s an interesting premise, but unfortunately screenwriter John Gatins spends far too much time setting the scene. When the narrative hits the point of no return, when action elements take centre stage, we, as viewers, are ready to lap up anything other than schmaltzy, imitative father-son conundrums. Thankfully, once the film passes this point, Gatins finds his mojo: dropping the diverting side-plots by the wayside, adopting humorous dialogue, an uplifting sensibility and a pace that never lets up. After a hefty, and completely unnecessary, 127 minute running time, the conclusion – which is surprisingly spot-on – commendably resists the oft overwhelming temptation to tie everything up in a nice, neat bow. Instead, he leaves audiences reeling in the excitement elicited from the final fight.

Real Steel, at its heart, aims to be an ultimate crowd pleaser, and crowd pleasing is what it excels at. From its incredibly rousing fight sequences, to the motion-capture and clearly futuristic CGI elements, the film goes all out. However, these are seamlessly worked in to compassionate, human backdrop. This is a film that not only delivers as a no-holds-barred action extravaganza, it’s one with an emotional core.

It may present the future in an entirely nonsensical fashion – who in their right mind expects Microsoft’s Bing search engine to still be around in ten years time?! – and obviously signposts several plot points from far too early on, but these are minuscule issues. If you came to be wowed by duelling hunks of metal elegantly shot by cinematographer Mauro Flore, they’re irrelevant. And hey, it’s in all presented in the magnificent second dimension, so dues must be paid to director Shawn Levy’s keen direction and ability to resist the second coming of 3D that seems to be attracting many Hollywood filmmakers.

Jackman and Goyo both deliver believable, sincere performances as the father-son pair, each harbouring their own personality defects which, along with their love of all things robotic, make them an oddly compatible duo, despite their overly amplified and all-too cheesy bond. And Evangeline Lilly, who secures a rare place among the testosterone, provides avid support as Bailey, the overly caring daughter of Charlie’s former trainer, who, despite every effort, can’t shake her devotion to her fathers belief in Charlie’s incredible abilities.

In no way shape or form is it perfect, but Real Steel is a blockbuster with a difference: it has a level of heart that’s no often missed in favour of nonsensical madness. The relationship between Charlie and Max may be played on too much in the hope of providing audiences with some emotional resonance, but there’s no doubting the film’s passion and jubilance when it comes to the over-the-top robotic boxing sequences, a spirited, in-your-face soundtrack and avid turns from its central cast.