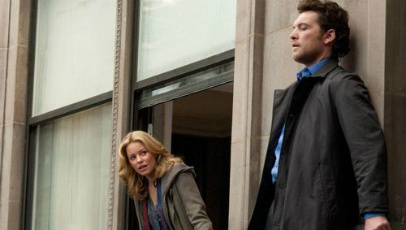 Man On A Ledge is, well, apart from being one of the worst titled films of the past few years, a relatively by-the-numbers, cluttered fare that director Asger Leth imparts in a passable, yet ultimately bland, attempt to breathe new life into the tepid thriller genre.

Nick Cassidy (Sam Worthington), an ex-cop and criminal at large, books himself into a fancy suite at the Roosevelt Hotel, New York. Rather than basking in his luxurious surroundings, he instead chooses to climb out onto the window ledge to prove his supposed innocence to the overly enthusiastic public and on-edge police force. Unbeknownst to those observing his every activity, his brother, Joey (Jamie Bell), and dewy-eyed girlfriend, Angie (Genesis Rodriquez) are carrying out a heist across the street.

Playing out as duelling yet complimentary narratives, Man On A Ledge is no less “high-octane” thriller than “psychological” drama. What at first appears to be Nick’s decent into the contemplation of suicide is actually him, with the aid of Joey and Angie, doing everything in his power to clear his name. It’s a conceit that has compelling and interesting written all over it, but these adjectives can unfortunately only be used in passing when summarising the films overall impact.

While there are clever aspects to the film – notably Nick’s relationship with negotiator Lydia (Elizabeth Banks), who’s able to find a connection due to their eerily similar backgrounds – these merely feel second-fiddle to the more typical elements that screenwriter Pablo F. Fenjves constantly reverts back to. He brings the usual clichés and contrivances – near-misses, deception, cheesy one-liners and blatantly obvious twists come to mind as the more irritating of the bunch.

Leth’s direction fairs better, optimising the unique locale with a dizzying, panoramic and sweeping camera, which plays nicely against the clean-cut lines used to depict the heist. The same can be said for the acting, with Ed Harris, Bell, Banks (proving with what she displays here that she’s capable of much better) and Anthony Mackie all doing their upmost to dispel the been-there-done-that-haze that surrounds the narrative and their respective characters.

It’s not enough though. As the lead, Worthington’s Nick is supposed to keep the whole effort ticking along, but he barely registers. Some may say it’s mindless and reading too much into it would be doing it a disservice, but when a film had such potential, it’s simply not possible to sidestep Man On A Ledge’s conspicuous flaws.