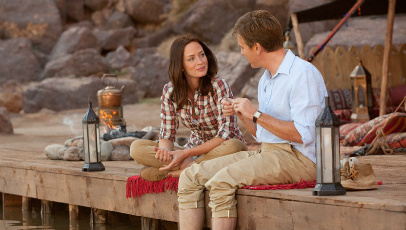 When conservative fisheries expert Dr. Fred Jones (Ewan McGregor) receives an unexpected request from legal representative Harriet Chetwode-Talbot (Emily Blunt), he finds himself embroiled in a wealthy sheikh’s ludicrous dream of introducing salmon fishing into the Yemen. After the project receives backing from the British government as a way of diverting attention away from their latest blunder in the Middle-East, Fred slowly finds the faith needed to turn a dream into a reality.

Adapted from Paul Torday’s acclaimed novel, screenwriter Simon Beaufoy employs neat tactics to ensure the narrative plays out at a believable, tempered pace, cleverly playing on the social satire to ensure the parable-like tone is established from the offset. Where the first half revels in the silliness of the sheikh’s dream, brilliantly captured in the way Fred tries every method possible to bypass the mammoth task put in his command, the second tapers off somewhat, falling foul to a number of inexcusable plot contrivances and annoyances – not least the terrorism subplot that alludes to the sheikh’s selfishness.

Unfortunately, there are numerous other themes and ideas bubbling around under the surface, such as the political standpoint of the British government, that might have worked better within the novel’s epistolary structure, but unfortunately come over half-hearted, perhaps due to being buried under a rich layer of saccharine. It’s a shame as, with a different approach, they could have offered up some neat comparisons between the fictionalised narrative and what’s happening in today’s society.

Where some aspects seemed ill-advised, the message of faith and determination that is so integral to the central narrative and Fred’s personal journey runs freely and buoyantly throughout the film, and makes all the inconveniences seem less obtrusive and more in keeping with the films overall intention: to be a light-hearted tale of self-discovery and belief in the preposterous. Much of that can be attributed to the dedicated cast. It’s a testament to their fine performances that the romance plot which develops between Fred and Harriet, while entirely unnecessary and inappropriate, is uplifted by McGregor and Blunt’s dedication and the chemistry they have to spare.

Blunt, in particular, captures Harriet’s optimism and charm with a natural flare, beautifully offsetting it against Fred’s more cautious and by-the-books personality. It’s Scott Thomas, though, who steals the show. Her prickly, to-the-point and snappy Patricia – Press Officer to the Prime Minister – offers some choice one-liners and insults that more often than not make for welcome distractions to the film’s more addling devices.

Under anyone else’s direction, Salmon Fishing In The Yemen could have suffered in its translation to the screen. Credit, then, must be given to director Lasse Hallström, who delivers an interpretation of the book which, through neat, caricature-like editing techniques and beautifully captured landscapes, juxtaposes the warmth and positivism of Yemen against the intrinsic negativity of Britain. The artifice may reveal itself to agitating levels come the silken ending, but the central journey of Salmon Fishing In The Yemen is a surprisingly thoughtful and sharply written one.