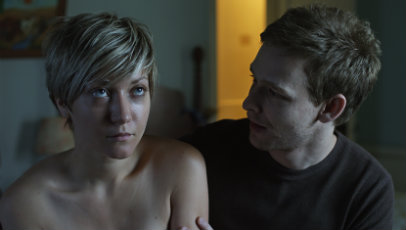 Newlyweds Molly (Gretchen Lodge) and Tim (Johnny Lewis) move into Molly’s family’s house on the outskirts of a forest. With his job as a truck driver requiring him to be away for long stretches of time, Molly finds herself living alone, desperately trying to avoid resorting to the drugs hat once ruined her life, and dwelling on the horrid days of her childhood. However, when she starts hearing peculiar noises and see things that may or may not be real, it’s clear her traumatic past is coming back to haunt her in ways that not only prove dangerous for her, but for those close to her.

Written and directed by Eduardo Sánchez, one half of the duo responsible for The Blair Witch Project (the other being Daniel Myrick), and introducing the cinema world to the found footage technique, Lovely Molly finds the filmmaker on familiar territory. And, while there’s still elements of the oft-used technique to be found as Lovely Molly plays out, Sánchez improves his chances at success by not restricting the methods he opts for, finding other – often of higher quality – ways to capture the escalating fear that Molly is experiencing at the hands of an evil that is part real, part supernatural, almost entirely ambiguous.

What’s most impressive about Lovely Molly, enabling viewers to immerse themselves in what’s happening, is how Sánchez is able to instantaneously blur the boundary between reality and imagination. It’s made clear that something sinister is haunting Molly and causing her mental breakdown, but always left to our own interpretation as to what this actually is, whether it be supernatural or, in fact, Molly’s own fragmented mind playing nasty tricks on her.

In that respect, the script is delicately handed, with the narrative unfolding at a pace that allows for the twists and turns to evoke authentic and palpable fear within Molly, which has a knock on effect on the unsuspecting audience. Sadly, while the tension established over the first hour or so is almost masterful, there’s a disastrous and off-putting lack of payoff as we enter the final act. Not only does this almost completely undermine the intensification that’s lead up to that point, but it also suggests that Sánchez either had no idea how to properly explain Molly’s ordeal or that he had cold feet when it came to actualising his desired conclusion.

There’s no denying Lodge’s talents, though. For a film that forces her to expose herself both psychically and mentally for its entirety, newcomer Lodge does impressive work. No matter how intense the atmosphere becomes, or even when the narrative veers off into substandard territory, Lodge never lets up with her performance, maintaining a solid, and somewhat affecting, hold on Molly’s progressively tormented state-of-mind. Solid support comes from both Lewis and Alexandra Holden as Molly’s sister, but this is very much Lodge’s film, and the writers do well to stick with that direction from start to finish.

With a performance that very much anchors it firmly to its uncertain foundations, Lovely Molly is an effective, yet unexceptional and shortchanging entry into the horror field. There may be a few interesting ideas, and it’s refreshing to see a writer and director focus on more believable internal horror than the conventionality of the supernatural, but the script is far too disconnected, hit-or-miss and lacking in its emotional payoff to make a lasting impression.