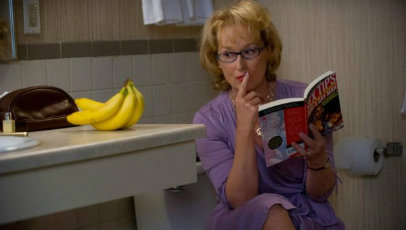 Middle-aged couple Kay (Meryl Streep) and Arnold (Tommy Lee Jones) have been married for thirty one years. Their relationship, however, is in a state of complete disarray, to the point where they’re sleeping in separate rooms and routine has become the only thing keeping them together. When Kay reaches breaking point, the couple embark upon an intense marriage counselling excursion that, despite Arnold’s initial opposition, may be the only hope they have of reigniting their nonexistent spark.

Written by first-time screenwriter Vanessa Taylor, Hope Springs is only as daring as it is predictable. With a narrative that centers squarely on Kay and Arnold’s efforts to overcome their own difficulties and reunite as a couple, it’s often bold in the mature themes it touches upon. The focus is unfalteringly upon the process couples go through to either patch up their differences or find an amicable way to cut their losses and split up, but it too frequently falls foul of the usual snags to truly engage.

That said, a brisk pace is maintained from start to finish, and Taylor’s writing is remarkably sharp and authentic, particularly in the scenes set within the confines of the room where both Kay and Arnold and forced to open up about their feelings – something that is new and scary to both of them. It’s these very real and recognisable counselling sessions that enable Hope Springs to remain moderately engaging even when throwing up some disappointing setbacks.

The main issue is, with a soundtrack that’s overcrowded with innumerable lyric-heavy pop tracks (Annie Lennox’ “Why” being the most manipulating), director David Frankel makes an almost desperate attempt to make the characters’ situation and emotions resonate with the audience. It’s not only distracting and disrespectful in the way it manipulates and undervalues its audience, but also in the way it overwhelms a perfectly susceptible screenplay in itself – one that portrays both of its characters as equals, refusing to take sides.

His directorial style may well suit the films more playful moments (the characters’ trip to a cinema is a noteworthy highlight), but is much too superficial to suit the darker, intense and more adult notions. It’s a testament, then, to the sheer talents of leads Streep and Jones, and even supporting players Steve Carell as Dr Feld and Elisabeth Shue as a local bartender, that the film bypasses these issues to retain its sprightly, yet earnest nature.

Streep successfully portrays a character that, while distressed and uncertain about her future, has a frivolous side that she’s never been able to fully explore. It sometimes feels as though she’s holding back somewhat in her performance, and that Kay perhaps needed to have a full-on emotional breakdown in order to find peace with herself, but it’s a minor issue that was perhaps out of her control. Jones, meanwhile, shines as Arnold, and enacts in no time some of the finest facial expressions captured on film.

While it always feels restrained for one reason or the other, and treads too carefully whenever it hints at exploring darker subject-matter, Hope Springs nevertheless succeeds due to a screenplay that’s light on its feet, and some performances of the highest quality. It’s an entertaining, if old-fashioned and comfortable time spent at the cinema, packed with instances that will make you laugh, snivel and recoil in light of its unexpected awkwardness in quick succession.