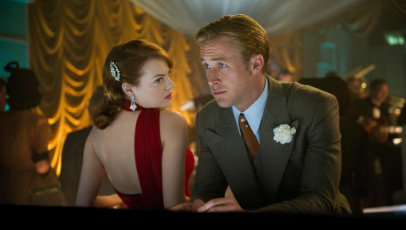 Taking a break from zombies and delivery boys, director Ruben Fleischer fashions a stylised and star-studded, yet vacuous entry into the cops vs. mob genre with Gangster Squad. Disappointingly, the American director tries far too hard to recreate 1987’s The Untouchables for the modern day audience, instead of making an engaging, moody and powerful film that can stand on its own two feet as a bold statement. Set in 1940s Los Angeles, crook and mob boss Mickey Cohen (Sean Penn) is determined to make the city his own by re-routing all the gambling money through a central trust system that would see him made for life.

With most of the LAPD under Cohen’s control, it’s up to John O’Mara (Josh Brolin) and his team of trustworthy men – Jerry Wooters (Ryan Gosling), Coleman Harris (Anthony Mackie), Max Kennard (Robert Patrick), Conway Keeler (Giovanni Ribisi) and Navidad Ramirez (Michael Peña) – to put an end to his reign of terror. Based on Paul Lieberman’s eye-opening series of LA Times articles about the LAPD’s undeterred efforts to bring down Mickey Cohen outfit from the inside out, Gangster Squad immediately feels shortchanged by screenwriter Will Beall’s inconsistent, shallow screenplay.

Barely skimming the surface of what was clearly a white-knuckle war for Los Angeles, Beall instead shifts focus onto monotonous action set pieces and uninteresting secondary plot threads. It makes for an uneven narrative that’s plastered with unavailing characters (even Mickey himself is without depth, making for a wasted performance by the keen Penn) and a sensibility that’s very much all show – the set design distinctly captures LA in all its period beauty – and little substance. Where it could have been a smart, funny and suspenseful white-knuckle ride, it’s instead a plodding and try-hand attempt at injecting some 21st century influences into what would’ve been more effective as a simple noir.

As director, Fleischer attempts to cover up the hit-and-miss screenplay with an almost comic book-like style that attempts to emphasise the action, violence and sex appeal. Unfortunately, while some scenes of violent bloodshed are effective in highlighting the undercover team’s unrelenting desire to stop Mickey in his tracks, it results in a film that’s more sleek, showy thriller than classic tale of power play and one-upmanship, which somewhat debases the real life story in which Gangster Squad is based on.

In many ways, then, it’s left to the skilled cast to try to salvage Gangster Squad as best they can. Brolin is commendable as John, a man hell-bent on creating an LA free of violence in which he can raise his unborn child, while Penn injects some dark humour into his role as Mickey. The rest of the cast, however, are left swindled by Beall’s trashy dialogue – Gosling and Emma Stone (as stray moll Grace Faraday) are landed with the worst of it – and under written roles that stop them from making impressions that do anything to raise the films overall worth.

This review was originally posted on Cine Vue.