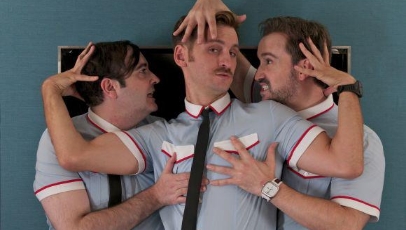 Pedro Almodóvar, one of Spain’s most internationally acclaimed directors (he’s won two Academy Awards to date), returns to familiar territory with I’m So Excited, his first out-and-out comedy since Women On The Verge Of A Nervous Breakdown was released some twenty three years ago. Gone are the somewhat sombre explorations of dark, labyrinthine subjects found within his recent crop of dramas, only to be replaced by all the necessary ingredients needed to make a frivolous, laugh-inducing and frothy farce.

When a technical failure caused by airport workers, played by Almodóvar regulars Penélope Cruz and Antonio Banderas, forces Peninsula Flight 2549 to circle Toledo until a runway can be sourced and prepped for an emergency landing, the equally outlandish and excessive characters aboard – from the camp and sexually promiscuous flight crew to the novel business class passengers – turn to alcohol, smuggled-on drugs and one another to forget their troubles and the uncertainties that lie ahead.

Clocking in at a trim 90 minutes, I’m So Excited takes place almost entirely above the clouds aboard Flight 2549 as the lives, vices and personalities of the many business class passengers and flight stewards (those in other parts of the plane have been drugged to sleep) are revealed concurrently through distressed phone calls, inebriated confessions cutaway scenes and, most memorably, a fast-paced dance number soundtracked to The Pointer Sisters’ “I’m So Excited”.

The characters are a diverse bunch and range from a psychic (Lola Dueñas) desperate to lose her virginity to a wealthy women (Cecilia Roth) whose convinced the crisis is a murder plot on herself. It’s difficult, however, to take the emphasis and deserved spotlight away from the trio of flight stewards – Joserra (Javier Cámara), Ulloa (Raúl Arévalo) and Fajas (Carlos Areces) – who own every aspect of I’m So Excited and are portrayed with finesse by the three actors in question (Cámara is particularly impressive).

Almodóvar, once again directing from his own script, balances the multiple storylines well and uses razor sharp dialogue and an expertly placed sex montage to accentuate the increasing paranoia and restlessness felt by those onboard. There are moments when the relentless comedy proves fatiguing, and the extended cutaway scenes relating to womanising businessman (Guillermo Toledo) are mildly irritating, yet these issues are never bothersome enough to detract from the escapism on offer.

Like his other films, I’m So Excited also functions as a critical commentary on Spain’s current economic problems, mostly in the way that Flight 2549′s unpredictability mirrors the countries uncertain future. However, while there may well be bite to Almodóvar’s affront, I’m So Excited works best when it is basking in its screwball, ultra-camp essence. It’s unlikely to ruffle any feathers, but boy is it great to see the Spaniard having some fun. And, after thirty three years in the business, he’s more than earned that right.