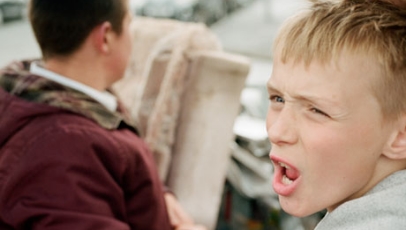 Three year’s after receiving recognition and numerous awards for her documentary on the troubled life of playwright Andrea Dunbar, writer and director Clio Barnard returns to the fold with The Selfish Giant, a poetic and beautiful social realist fable that finds her back on the run-down, doubtful council estates of Bradford. Inspired by Oscar Wilde’s short story of the same name, the film is a difficult, but beautiful watch – one that seizes the audiences attention from the off and rarely lets up.

Arbor (Conner Chapman) and his best friend Swifty (Shaun Thomas), two disorderly teenagers living on a downtrodden estate, are in constant trouble. When their latest stunt results in their expulsion from school, the boys turn their hand to copper metal collecting, and soon cross paths with Kitten (Sean Gilder), a local dealer who races horses on the side. Whilst Swifty’s attention changes to caring for the horses, Arbor strives not only to make a decent wage, but also to impress Kitten, no matter the cost.

The Selfish Giant is an uncomfortable watch. Barnard’s dedication to reflecting the cruel and harrowing reality of social deprivation through the eyes of two tortured thirteen year olds is difficult to bear at times. But that, too, is what makes the film so brave and compelling. The characters and the daring lengths they reach to in order to better their lives are entirely real. There’s no easy way out for Arbor and Swifty, and that’s hammered home well through Barnard’s unflinchingly honest, yet beautifully literate script.

Though tough in its exterior (Mike Eley’s cinematography captures the streets and outer environs in all there cheerless actuality), The Selfish Giant has a beautiful emotional core in the form of Arbor and Swifty, who are portrayed excellently by newcomers Chapman and Thomas. The bad influences and outside forces that restrict them (social status, intelligence, etc) fail to put a dampener on their spirits and aspirations, and the humour and warmth that emits from their relationship and endeavours brings with it shades of optimism.

The devastation the eventual denouement causes is none more earth shattering to the audience as it is to the film itself.  And for that achievement, Barnard – and, in many ways, Chapman and Thomas, too –  deserves every accolade coming her way.  This is a film that starts out like a typically harsh British social realistic drama, but by the end has transformed into so much more: an tender, dazzling and almost mythical piece of filmmaking that’s rooted so brilliantly by a pair of triumphant central performances.