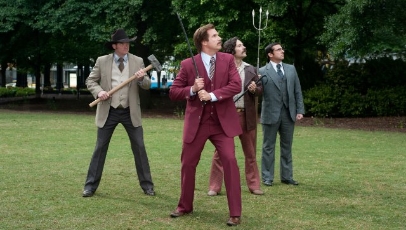 The inspired absurdity of Anchorman: The Legend Of Ron Burgundy ensured that, even after its initial box office disappointment (its overall worldwide cume rang in at a paltry $90M), the film – co-created by comedy duo Adam McKay and Will Ferrell – went on to become a well-loved cult classic. Now, nearly a decade later, and Anchorman 2: The Legend Continues has emerged from development hell as a worthy, if at times bloated and slapdash, sequel that’s more of a hit than it is a miss.

With a successful career co-anchoring the news with former enemy turned lover Veronica (Christina Applegate, sorely underused) at a popular network in New York City, Ron (Ferrell) is living the high life. But when Veronica is promoted over him, he finds himself cast adrift once more in San Diego. It’s only when he’s approached to be a part of a burgeoning 24 news network that he decides to re-assemble the news team – Brian (Paul Rudd), Brick (Steve Carell) and Champ (David Koechner) – and show everyone’s who’s boss.

Clocking in at lengthy 120 minutes, Anchorman 2: The Legend Continues is zany and unpredictable at best. It’s a film that’s severely lacking in structure, overlong and badly edited. There’s simply too many ideas at play, meaning many subplots are over all too quickly (Ron’s rather funny rivalry with vain anchorman Jack Lime, played by James Marsden, could have done with some more air time), while other, less successful ones last for far too long (the insane cameo-filled finale, as brilliant as it is, could have done with a trim).

But then, when it strikes excellence, it does so in such a hysterically funny and sharp way that mostly makes up for its inconsistencies, excesses and reluctance to venture to far away from a legitimately successful formula. McKay and Ferrell, who co-wrote the script, strike a fine balance between the old and the new as memorable gags are revisited, while enough new territory is delved into – like, for example, Ron’s relationship with his son, and a new romance for Brick – that ensures it’s not an exact copy of its predecessor.

It’s also important to note how well 80s ideals are imbued into the narrative. Whether it’s the rise of female empowerment (Meagan Good’s Linda Jackson is a feisty and headstrong network executive) or the rapid devolution of TV news broadcasting, there’s a striking undercurrent that adds weight to the comedy. And that, in addition to the top notch performances delivered by Ferrell and co., is what gives Anchorman 2: The Legend Continues its edge and renders it one of this year’s more blissfully entertaining comedies.