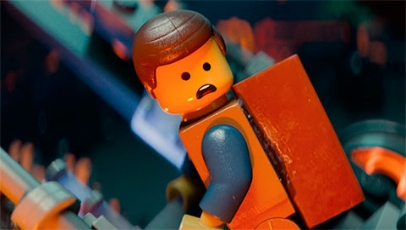 First manufactured in 1949, LEGO – a line of colourful, plastic interlocking bricks – have since increased exponentially in popularity and scope. There was an overriding concern, then, when Warner Bros. announced The Lego Movie that it would be nothing more than a ridiculous marketing tool. But then directors and certified miracle workers Christopher Miller and Phil Lord came aboard, and the pieces soon fell into place, enabling a new animation classic to be born.

Emmet (Chris Pratt), an everyday Lego mini-figure, lives a simple life in Bricksburg. His life is turned upside down, however, when he stumbles upon the Piece of Resistance and is mistakenly identified as the Special – the key to saving the world from the evil plans of President Business (Will Ferrell). With the help of Wyldstyle (Elizabeth Banks), Vitruvius (a brilliantly playful Morgan Freeman) and a fellowship of MasterBuilder’s, Emmet must attempt to stop him in his tracks.

The above summary is merely an upshot of The Lego Movie’s vast narrative – one that has a relentless buoyancy to it that seizes the audiences attention throughout. It’s an inspired and hilarious ride that’s never short on startling twists, turns and unexpected surprises . The main characters, too, are bizarrely brilliant – Vitruvius, Batman and Good Cop/Bad Cop, in particular – and the fast-paced script allows for some truly memorable moments to unfold.

That’s not to say it’s all bark and no bite, however, as there’s a massive amount of warmth and soul – and a sprinkle of nostalgia – underneath it’s high-spirited, innovative exterior. Emmet is a relatable protagonist whose character arc is extremely true to life (Pratt’s voice work in the role is full of enthusiasm and heart, too), and the message at the films core is one that celebrates individuality and creativity, while criticising the emancipation caused by a capitalist society.

It’s also worth mentioning how impressive the animation and overall execution is. The meticulous care that’s been invested on everyone’s part to ensure everything on display – from the Warner Bros. logo, right through to the finer details, such as fire and water – looks like it’s been made from real Lego pieces is no mean feat. But it all these fantastic elements help to deliver a film that strikes a rare balance between reality and fantasy, affirming the fact that people’s imaginations are by far their finest virtue. Everything is, as the film constantly remarks through song, awesome.