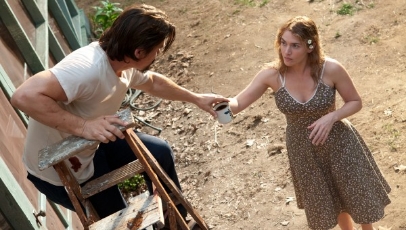 Praised for his sharp comedy work that made the likes of Juno and Up In The Air such successes, director Jason Reitman makes an awkward shift to darker, solemn material with Labor Day, a respectable, but not quite there adaptation of Joyce Maynard. Left despondent by the breakdown of her marriage, single mother Adele (Kate Winslet) has become trapped by her own unwillingness, leaving son Henry (Gattlin Griffith) to pick up the slack. Then, on an infrequent trip into town, Adele’s world changes when Henry offers escaped convict Frank (Josh Brolin) a lifeline. Impaired by a reliance on schmaltz rather than his usual blend of whip-smart dialogue and dark humour (a peach pie scene towards the middle is absurd), Labor Day scuppers its chances of hitting the marks it wants to hit. Yet, and thanks to an array of top notch performances from the central trio and an understated warmth (the cinematography is excellent), the film seeps under the skin as Adele slowly emerges from her shell to form a beautiful relationship with Frank. The build-up of tension, too, keeps the audience on their toes as to how it’ll all come to an end. While it may not be Reitman’s best film by a long shot (it would’ve worked better as a straight up melodrama – something that’s corrected at an all too late stage), Labor Day is far better than many have suggested.