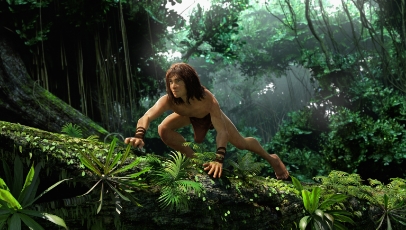 The repute of Edgar Rice Burroughs’ widely-known fictional hero Tarzan is defiled by German-born director Reinhard Klooss’ soulless and inefficient 3D animated adventure. Abandoned in the depths of Africa when his parents die in a horrific helicopter crash, Tarzan (Kellan Lutz) – as he’s renamed – is raised by apes, quickly adapting to their way of life. His peaceful life is threatened, however, with the arrival of Greystoke Energies, who will stop at nothing to locate a formidable power source. Underpinned by a bizarre backstory involving the meteor that brought a sudden end to the dinosaurs, leaving behind a mystical rock, this is one scrambled and stale reinvention endeavour that ticks over listlessly for its entire run time. There’s little excitement nor real risk to the narrative, and the characters are astronomically passive (Lutz has yet to validate his talent outside his body and ability to make squawking noises), accentuated through their expressionless facial expressions and movements. An absorbing adventure it is not. The only moderate achievement is the animation, which blends performance-capture and traditional CGI to convey the rich African landscape. Otherwise, this is a pointless attempt to challenge Disney’s treasured classic.