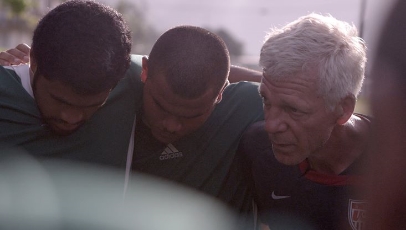 Next Goal Wins, about American Samoa’s ill-fated football team, is an uplifting and insightful documentary with real heart. Ranked the world’s worst football team, American Samoa are in dire straits. And, with the 2014 World Cup qualifiers fast approaching, Dutch-born coach Thomas Rongen is hired in an attempt to bring the team up to scratch. First-time directors Mike Brett and Steve Jamison have fashioned a captivating documentary full of heart and soul that’s irresistible to watch as the team use their past failings, coupled with their own willpower and the force of Rongen’s authoritative tactics, to push for success harder and father than ever before. It helps that everything about the film is real, and the laid back approach adopted by the directors ensures that the players’ true colours and their intrepid, admirable resilience shines through (the community spirit and bond between them is a true high point of the film). Even for non-football fans, Next Goal Wins is a rousing and uplifting film about how hard work has a habit of paying off – eventually.