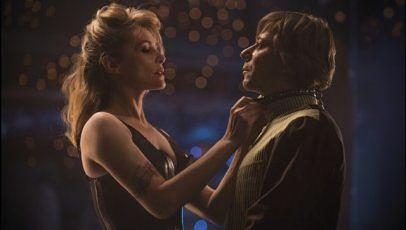 Playful, yet imbued with intense undertones, Venus In Fur – Roman Polanski’s reworking of David Ives’ play of the same name – is a sharply written and well drawn two-hander. Fed up auditioning terrible actresses for a play he adapted, Thomas (Mathieu Amalric) is left bewildered by the arrival of Vanda (Emmanuelle Seigner), a seemingly atrocious actress who quickly proves her worth.Effectively a power-play between man and female, Venus In Fur is richly layered but light and racy on the surface as Thomas and Vanda delve deeper and deeper into the play, embodying their characters’ every morsel to heated avail, only occasionally surfacing for air. Amalric and Seigner make for a brilliant twosome, and Polanski’s directorial choices – the rigid and ever-confining stage-setting and the use of Alexandre Desplat’s score, in particular – help to amp up the tension no end. It’s unlikely to be to everyone’s taste, but Venus In Fur is a wicked delight.