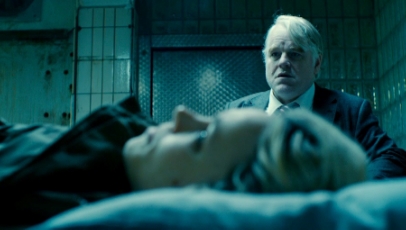 Adapted from John Le Carre’s best-selling novel of the same name, and featuring one of the final performances from Philip Seymour Hoffman, A Most Wanted Man is a well-intentioned but unmistakably dreary thriller. In Hamburg, a half-Chechen illegal immigrant (Grigoriy Dobrygin) who stakes claim to his father’s fortune catches the attention of rogue intelligence officer Günther Bachmann (Hoffman), whose suspicions have been heightened since the events of 9/11. Paranoia reigns supreme throughout the film, and Anton Corbijn’s hushed direction, combined with Benoît Delhomme’s dusty cinematography, produce a superbly tense atmosphere. It’s benefited by a world-weary performance from the late Hoffman. But the film is also frequently dull, and is cluttered by sub-plots and an assortment of uninteresting supporting characters (Willem Dafoe’s banker, most notably, while Rachel McAdams is so-so as a lawyer caught up in the crossfire). It’s a film that’s quietly measured, but the payoff isn’t quite as satisfying as the build-up or Hoffman’s stalwart skill.