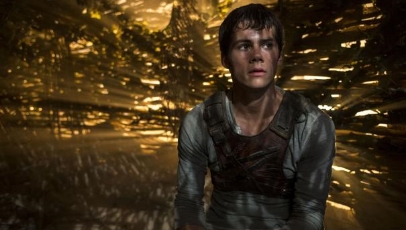 The Maze Runner, the latest YA novel to be adapted into a film, is a well-made and energetically performed dystopian sci-fi adventure with smarts. Dylan O’Brien stars as Thomas, a youngster who wakes up trapped in an enclosed colony with a crowd of other boys and no memory of his past. Their only chance of escape is to master a complicated, treacherous maze that brings surprising, life-changing consequences into play. James Dashner’s material is perfect fodder for the big screen, and first-time director Wes Ball does reasonably well to keep the film tight and focused to appeal to the masses. The scenes set within the maze are by far the most thrilling, and some neat camera tricks build – and perpetuate – tension brilliantly. O’Brien makes for a scintillating lead, and is ably supported by a host of up-and-coming actors, namely Thomas Sangster and Will Poulter. It suffers somewhat from expository scenes that put a temporary stopper on its thrills in place of laying the foundations for future instalments. And the cliffhanger can be seen from more than a mile off. But The Maze Runner more than makes up for it elsewhere, and is by far the best of a recent crop of similar fare.