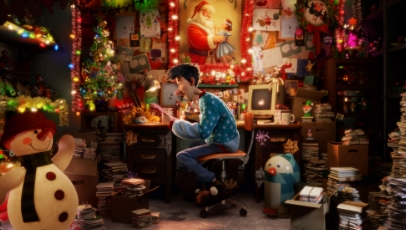 From the studio responsible for Chicken Run and Wallace & Gromit, Arthur Christmas is a festive delight through and through. Santa (Jim Broadbent) is coming to the end of his service, with his eldest son (Hugh Laurie) in line to take the reigns. But when a present fails to be delivered, it’s only Arthur (James McAvoy) who seems to care, taking it unto himself to ensure no child is left out. The rather conventional narrative rambles at times (the mid-section isn’t nearly as clever as its frantically virtuoso opening) and the message at its core isn’t exactly understated. But there’s an unquestionable abundance of absurd humour and slapstick comedy, most of which hits unexpectedly and splendidly, that spills out across the screen. The cast all provide wonderfully enthusiastic performances, imbuing their respective characters with unique attributes and panache. McAvoy is a particular stand-out, while Ashley Benson is deserving of a mention as wrapping expert Bryony. Arthur Christmas may not reach the heights set by Aardman’s claymation effects, but as a slice of festive nonsense, it’s spot on and immediately demands copious rematches.