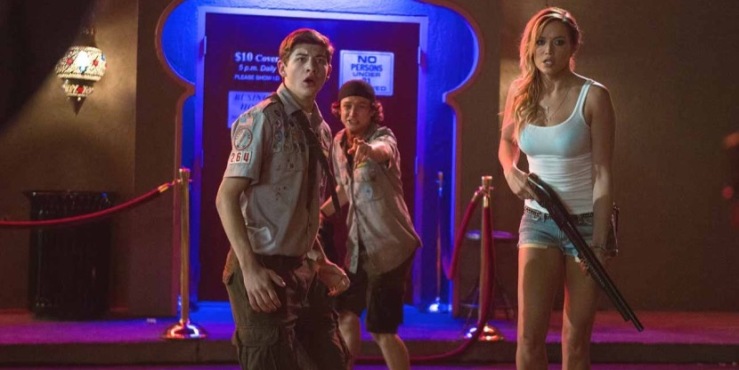 Juvenile humour and bad taste abound in Scouts Guide To The Zombie Apocalypse, a shoddy mix of horror and comedy aimed squarely at pubescent boys. Our heroes – or cliched halfwits more like – are teens Ben (Tye Sheridan), Carter (Logan Miller) and Augie (Joey Morgan), who are forced to put their scouting wits to use when their town is affected by a disease that turns many of the residents into ravenous zombies. If there’s a neat concept to Scouts Guide To The Zombie Apocalypse, then it’s buried deep underneath the foulest and most sexist script imaginable. Any semblance of skill and imagination is thrown out the window almost immediately, save for one of two brief sparks dotted around, none of which involve the see-through female characters, as director Christopher Landon surrenders to a script that’s forever scraping the bottom of the barrel. There’s surely an audience for the film, but they’ll need to be of a certain age and IQ level to appreciate the majority of this distasteful flub.

2 thoughts on “Review: Scouts Guide To The Zombie Apocalypse (2015)”