After their successful pairing in Adventureland, Kristen Stewart and Jesse Eisenberg reunite for a ropey stoner comedy that coasts on their individual wits and chemistry rather than its own thrills. Perpetual stoner Mike (Eisenberg) – who is in fact a sleeper operative – has plans to propose to his girlfriend Phoebe (Stewart). But when he’s targeted for elimination, his program is activated, leaving him battling for survival. END_OF_DOCUMENT_TOKEN_TO_BE_REPLACED 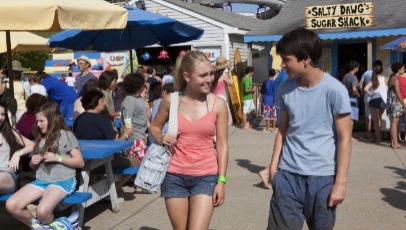 There’s nothing more re-done than a coming-of-age comedy. Yet The Way Way Back, like Little Miss Sunshine and Ruby Sparks before it, is one of the rare ones that, despite treading familiar territory (it can’t help but feel like a younger version of Adventureland, particularly in relation to its amusement park setting), boasts such a tender, acute script and well-rounded characters that it’s impossible not to succumb to its charms and harsh-but-true honesty. END_OF_DOCUMENT_TOKEN_TO_BE_REPLACED