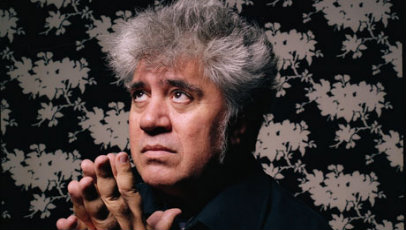 Writer, producer and director Pedro Almodóvar is arguably the most well-known and well-regarded Spanish filmmaker in the country’s colourful history. With eighteen feature films under his belt, and another currently in post-production, Almodovar has gone from strength to strength in his 30-odd year career, creating films that not only entertain, but also educate and captivate. END_OF_DOCUMENT_TOKEN_TO_BE_REPLACED

This week: Pepi, Luci, Bom And Other Girls Like Mom

Pepi, Luci, Bom And Other Girls Like Mom was Almodóvar’s first feature-length film, and it follows the adventures of the three titular characters: Pepi (Carmen Maura), who wants revenge from the corrupt policeman who raped her; Luci (Eva Siva), a mousy, masochistic housewife; and Bom (Olvido Gara), a lesbian punk rock musician.

If Almodóvar’s aim was to distress his viewers, then he has done so admirably – in fact, most of the narrative is spurred on by Almodóvar’s insistence on transposing the taboo-ridden society by using various shock schemes, such as Pepi’s rape, Luci’s uncomfortable obsession with a 16-year-old punk rocker, and an abrupt “golden shower” scene. However, the sections in between feel out of place and all too dull in comparison, betraying the fact that the director was at the start of his career, and had a lot to learn in terms of seamlessly blending the exploration of illicit subjects with a cohesive and enchanting story.

The instinctive and visionary style we’ve come to expect from Almodóvar is present, but in an altogether limited and immature capacity. Almodóvar basks the film in rich, buoyant colours, and uses them to symbolise and accentuate sanctioned themes such as homosexuality, the sexual and moral freedom of women, and the liberation of society. However, with a limited budget and a sense of naivety, the mix of harsh reality and subversive humour doesn’t work on the palatable level he achieves today.

In terms of acting, Maura – who plays boundlessly energetic Pepi – is the only of the three central actresses that stands out. Maura’s role, which admirably personifies the film’s shock-value spirit, is that of an innocent, naive girl who, after a loutish policeman rapes her and steals her virginity, suddenly becomes a frightening, forceful woman hellbent on revenge.

Siva and Gara, who play Luci and Bom, were both respectable enough, developing their individual characters’ personalities in a believable way as they experienced set-backs and glorified highs. Nevertheless, both were portrayed in contradictory ways by Almodóvar – something that doesn’t sit pretty with the overall intention of the film and character arcs. The male characters of the film are tentatively kept in the background and painted in a bad light, further emphasising Almodóvar’s desire to show that women are much stronger than men.

While it may not be as robust as Almodóvar’s recent films, Pepi, Luci, Bom And Other Girls Like Mom is certainly him through-and-through; albeit a more insecure and disconcerted version of the director we’ve come to regard so highly. Even so, the film perfectly managed to capture the spirit of the times – above all the sense of cultural and sexual freedom – when Spain was finding its voice again after years of being silenced by dictator Francisco Franco.

Next week: Labyrinth Of Passion