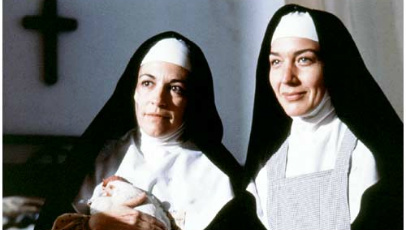 Dark Habits was Almodóvar’s third feature feature-length film, and the first to be made readily available on DVD in the US. The film revolves around nightclub singer Yolanda Bel (Cristina Sánchez Pascual), who seeks asylum in a Madrid convent after delivering strychnine-laced heroin to her boyfriend and fleeing the police.

With the plot synopsis you’d be prone to think that Dark Habits was a madcap affair. However, the result is more nuanced than you’d expect, with Almodóvar more considerate and respectful of his characters this time around. He lets them come into their own and replaces many of the melodramatic plot scenarios seen in Pepi, Luci, Bom And Other Girls Like Mom and Labyrinth Of Passion with more involved artifices. This growth in storytelling sees the characters’ individual arcs tied together into a much more satisfying whole, delivering a more rounded and sophisticated experience when compared to the clunky nature of his first two films. It’s clear he’s becoming less obsessed with melodrama and more interested in the dramatic.

Almodóvar’s direction reflects the laid-back and curious sentiment he holds for the characters and their respective plot-threads. In turn, he opts for long takes and observing camera angles, rather than the imposing and busy style we’ve become accustomed to. Dark Habits still emphasises Almodóvar’s reliance and fixation on bold colours, bizarre costume, and spunky decor, but they aren’t as in-your-face or obtrusive, which clearly shows that not only is Almodóvar evolving as a storyteller, but also as a director.

The performances within Dark Habits are subdued in a way that doesn’t always reflect the wacky makeup of the collection of characters on display: from drug addicted murderesses to berserk prostitutes. None of the characters engage in the way so many from Almodóvar’s future projects do, and they often remain as restrained as the uncharacteristically muted colour palate of the set design. Even though this can be chalked down to lack of experience, when you see how human and sympathetic Almodóvar makes certain characters in his latter films, you’d be excused for feeling a little disappointed at his lack of adventurousness here.

Dark Habits may be, at times, be clunky, flat and too restrained for its own good, but it does demonstrate Almodóvar’s growth, his developing interest in deeper, more affecting subject matter and his overall desire to strike the right balance between melodrama and straightforward drama. It’s an uneven piece of filmmaking, but perhaps the most reflective of Almodóvar’s true intention as a filmmaker to date.

Next week: What Have I Done To Deserve This?

This week: Labyrinth Of Passion 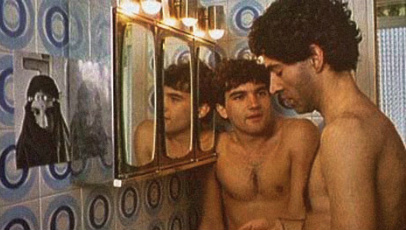 Labyrinth Of Passion was Almodóvar’s second feature feature-length film, and it saw both a marked technical and visceral improvement on Pepi, Luci, Bom And Other Girls Like Mom. The film is about four central characters:  Sexilia (Cecilia Roth), a nymphomaniac; Sadec (Antonio Banderas), a gay Islamic terrorist; Riza Niro (Imanol Arias), the son of the emperor of Tiran; and Queti (Marta Fernández Muro), the daughter of a dry-cleaner. When Riza Niro discovers that Sadec and his colleagues are after him, he disguises himself as a punk rocker, and falls in love with the stunning Sexilia, his first straight relationship. Meanwhile Queti, Sexilia’s “biggest fan”, helps Sexilia come to terms with her new life-style.

As you would expect from such an array of gender confused characters, they spend a fair amount of the running time stoned or indulging in a multitude of other carnalities, but, to the films merit, everyone slots neatly into their clearly defined roles with an unsettling yet nonchalant ease. From the beginning, Labyrinth Of Passion is fast-paced, camp, brazen, trashy, frivolous, and flippant. In simple terms, it does exactly what it says on the tin, and has a lot of fun in the process.

As expected, the film has a unmitigated look, filled with outlandish costumes, a gallery of psychedelic colours, and ridiculously excessive hairdos that stand out against the drab city backdrop. Despite this, Almodóvar directs with a notably naturalistic eye which lends the proceedings an almost plausible air, making the weird and wacky characters seem very much as ease with their absurd lives and Madrid’s unorthodox aura.

While there’s no specifically brilliant performances on display and, with a cast of larger than life characters, it’s difficult to emote with anyone in particular. Each cast member delivers an enthusiastic turn, adding a certain personal touch to the ensuing mayhem. Banderas (who becomes a frequent collaborator with Almódovar in later films) has a small, yet alluringly arousing role as an Islamic terrorist who uses his sense of smell to track down and kidnap the emperor’s son, while Almodóvar himself makes an inspired cameo appearance as a leather clad transvestite pop singer, wonderfully blurring the line between artist and art.

Labyrinth Of Passion supplies a very early glimpse of Almodóvar’s talents and the themes which he re-addresses in greater depth in his later films, though arguably with less spirit and boyishness enthusiasm than is on display here. It may be, at times, a messy, chaotic and unfocused mind fuck, but it’s certainly one that demands attention as a piece of wild cult cinema from a burgeoning director discovering his voice.