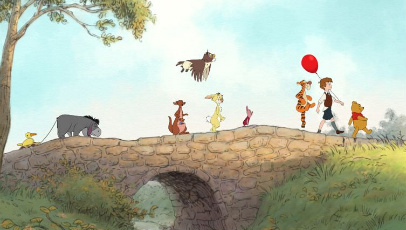 After 35 years, Walt Disney Animation Studios bring Winnie The Pooh back to the screen in a new adventure for the amiable gang.

During an ordinary day in Hundred Acre Wood, Winnie The Pooh sets out to find some honey. Misinterpreting a note from Christopher Robin, Owl convinces Pooh, Tigger, Rabbit, Piglet, Kanga, Roo and Eeyore that their young friend has been captured by a creature named “Backson” and they set out to save him, with the lovably pessimistic donkey keeping an eye out for his ever-disappearing tail along the way.

The plot, while simple, meanders with lively diversions making it both endearing and entertaining for the very young, and whimsical enough to appeal to the nostalgic older demographic.

Stephen J. Anderson and Don Hall do nothing in particular to disturb the status quo, but still manage to make Pooh look fresh and original, even while treading carefully to ensure they don’t ruin the beloved cultural memory of such a classic cartoon.

The animators superbly retain the look of E.H. Shephard’s classic illustrations while adding a number of sublime, modern touches through sharp attention-to-detail, luscious hand-painted backdrops and some well-integrated digital sequences.

Winnie and friends are all voiced with great care and energy. These classic characters look fantastic, but it’s through the skilful vocal work that they are truly brought to life. Whether it’s Tigger’s energetic lisp, Eeyore’s defeated sighs or Winnie’s emphatic “Bother”, these are very much the same animals you’ve come to know and love.

Zooey Deschanel’s quirky-cutesy voice works wonders in bringing Pooh into the 21st century, and helps the original songs to work harmoniously with the classically-tinged score, both of which beautifully enhance the overall experience.

Winnie The Pooh is enchanting, whimsical, and as luscious as the classic shorts. Its brevity makes it all the more winsome.