The latest in the line of R-rated comedies hoping to capitalise on the success achieved by The Hangover, Bridesmaids and The Heat, We’re The Millers boasts a starry cast and neat premise, yet squanders both by subjecting them to a hit-and-miss script and a series of laughably uninspired gags. When small-time pot dealer David (Jason Sudeikis) has his marijuana stash stolen, he’s forced to become a drug smuggler to repay the debt to his boss.  END_OF_DOCUMENT_TOKEN_TO_BE_REPLACED 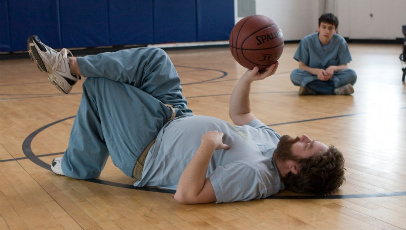 Based on a teen novel by author Ned Vizzini, It’s Kind Of A Funny Story is a new comedy-drama from the hotly-tipped writer-director team Anna Boden and Ryan Fleck (Half Nelson).

The film centers on a clinically depressed teenager, Craig (Keir Gilchrist), who gets a new start when he checks himself into an adult psychiatric ward after contemplating suicide.

It’s Kind Of A Funny story marks the first time Boden and Fleck have not worked from their own material and the lack of character development and authenticity of the plot is noticeable from the offset.

It’s a light comedy that, although managing to avoid common cliches of the genre, ultimately feels too simplistic, cherry-topping the severity of mental health issues, making them somewhat feel implausible and negligible.

A common trait of this is whenever characters’ health issues are touched upon the direction of the film suddenly switches, as if the writers are sidestepping the underlying complexity of the films premise, instead focusing on the unconvincing relationships between the central characters.

Boden and Fleck can’t be blamed for the writing, but their handling of the material often feels dull and laborious, something that makes the film ultimately monotonous a waste to its audience. It almost seems as though they’ve regressed after the sublime, authentic Half Nelson.

The cast, on the other hand – lead by Gilchrist, Emma Roberts and Zach Galifianakis – boast likeable, dynamic and intermittently convincing performances with the material they have. It’s just a shame they’re let down by an incoherent script, detached direction and inconceivably unbelievable character relations.

It’s Kind Of A Funny Story is an agonisingly bland, contradictory and unoriginal film. The only glimmer of hope for Boden and Fleck’s future comes from the respectable performances and Broken Social Scene’s breezy, equivocal soundtrack.