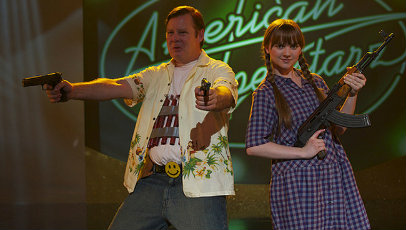 Frank (Joel Murray) has become disillusioned not only with his life, but also with the current state of society. His neighbours are inconsiderate, his daughter is turning into a reality TV wannabe and he’s recently been fired by his boss. He daydreams about doing his bit to save society from crumbling entirely, but simply doesn’t have the stomach to carry this out. However, when he’s told by his doctor that he may have a life-threatening brain tumour, he decides that life is END_OF_DOCUMENT_TOKEN_TO_BE_REPLACED

At a low-key press conference at the Edinburgh Filmhouse earlier this morning, newly-appointed artistic director Chris Fujiwara took to the podium to announce the official programme for the Edinburgh International Film Festival 2012, due to take place at venues across Edinburgh including Cineworld, Filmhouse and the Cameo from June 20 – 1 July. The festival, now in its 66th year, will include 121 new features and documentaries from over fifty countries around the world. END_OF_DOCUMENT_TOKEN_TO_BE_REPLACED