Frankie (Scoot McNairy) and Russell (Ben Mendelsohn), two cocksure yet inexperienced crooks, are hired by Johnny (Vincent Curatola), aka The Squirrel, to carry out a hit on a local high-stakes poker game being run by Markie Trattman (Ray Liotta), a mob boss known for robbing one of his own games in the past. Figuring they’re covered, Frankie and Russell return to their respective lives, unaware that enforcer Jackie Cogan (Brad Pitt) has been called in by an unknown END_OF_DOCUMENT_TOKEN_TO_BE_REPLACED 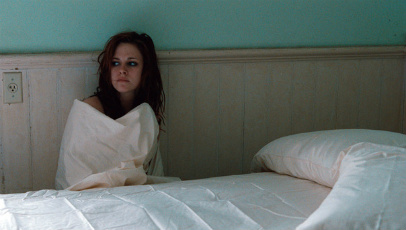 Welcome To The Rileys is a promising debut feature from music video director Jake Scott about tossed souls learning to overcome sorrow and loss.

The film follows Doug Riley (James Gandolfini), a damaged plumbing-supply salesman who struggles to find his place in the world after the death of his daughter, Emily. Things start to look up for Doug when he goes to New Orleans for a conference and meets an underage stripper named Mallory (Kristen Stewart). When Doug tells his wife, Lois (Melissa Leo), he’s not coming home, her response triggers a change for all three characters.

Essentially the film is made up of two parts: the first is the odd, father-daughter relationship between Doug and Malorey; and the second centers on Lois as she is forced to overcome her agoraphobia to save her marriage. When the two worlds are brought together, there’s an initial reluctance from all side, beautifully played by each actor, before they slowly begin to accept each others flaws and mould together.

The narrative is driven by the quieter, intimate moments shared between the characters, rather than relying on brash, noisy confrontations to propel events forward. This technique makes the film more realistic and raw, allowing audiences to understand the characters’ pain and disparity, but also, mainly towards the end, makes the film feel too bitter-sweet, like it’s trying to hard to wrap things up in a neat, content bow.

Gandolfini plays Doug as a benevolent, caring father-figure to Malorey and honest, earnest husband to Lois. Leo is exceptional as the troubled, lost soul Lois, who is pushed to reclaim her life and sense of being through events out of her reach. Stewart brings a naked vulnerability to her performances as Malorey, crafting her into a realistic and vibrant character, haunted by her loneliness and troubled upbringing.

Welcome To The Rileys is a solid debut piece of filmmaking from Jake Scott, driven by its honest script and three brave and charismatic performances.