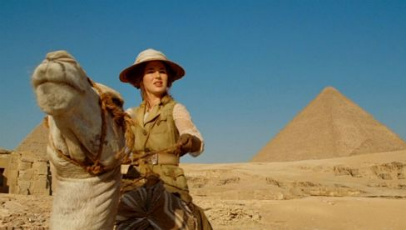 The Extraordinary Adventures Of Adèle Blanc-Sec marks the return of fanciful writer/director Luc Besson, and is the big screen adaptation of Jacques Tardi’s acclaimed series of comics.

The film centers on Adèle Blanc-Sec (Louise Bourgoin): a young, go-getting journalist who embarks on an adventure to Egypt, and ups up face to face with all sorts of mummies. Meanwhile, in Paris, panic ensues.

Besson’s film is busy and energetic. The action is adventurous, the plot absorbing, the characters vibrant and the humour dark and caustic.

To some, the plot may seem a little implausible and out-of-control, but it’s hard to condemn the film too much when Besson is being so imaginative and impressively daring with the material.

Adèle, unquestionably the most intriguing character, is played with a breezy, almost klutzy charm by Louise Bourgoin. Although a marvellously feisty, cocksure and brilliantly cutting heroine, Bourgoin brings an impressive level of self-assuredness to Adèle that commendably keeps the character – and film – grounded, appealing, and focused on the task at hand.

The supporting cast are equally terrific, including a blustering, lazy cop (Gilles Lellouche); a trigger-happy hunter (Jean-Paul Rouve); and a charming young scientist (Nicolas Giraud). Each approach their frolicsome roles with both assertiveness and playfulness.

Besson rightfully plays the whole thing for laughs, which makes up for the overindulgent supernatural elements and chaotic sub-plots. Rather than attempting to impress with mountains of CGI, he keeps the action and adventure scenes grounded, with a naturalistic and wholly believable feel. That said, when CGI effects are used, they imbue the film with a touch of class and a stylish air.

The Extraordinary Adventures Of Adèle Blanc-Sec is a joyfully intrepid, if slightly overloaded, fantasy adventure, boasting a director at his most imaginative, and a wondrously energetic lead performance.