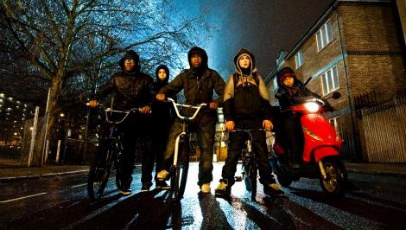 Attack The Block is a low-budget British sci-fi blockbuster from writer/producer extraordinaire Joe Cornish, starring a mix of established actors and unknowns engaged in an intense battle for their meagre council estate in South London.

The film begins with young nurse Sam (Jodie Whittaker) being mugged by a horde of teenagers from her South London housing estate, when they are interrupted by something large falling onto a nearby car. The action immediately switches to the youths confronting and killing a vicious, unearthly creature – unknowingly making themselves the target of an invasion of flesh-ripping aliens.

The premise may seem straightforward, but Cornish injects the script with such warmth, humour, action, violence and thrills that it evolves from a low-budget sci-fi film into something much larger. He finds that elusive dynamic that makes an instantly timeless blockbuster, which is as much a nail-biting action-thriller as it is an amusing character study.

The fact that the action remains within the surrounding environment of the titular “block” makes the film feel even more claustrophobic, realistic and altogether climactic. However, by littering the film with witty dialogue, playful characters and a wonderfully fanciful yet astute premise, Attack The Block manages to be hardcore and genuinely frightening, while never taking things too far and losing its earthy charm.

Cornish’s direction complements the confined action superbly. By layering it with throwbacks to 1980’s filmmaking, Cornish keeps the special effects, gimmicks and tricks to a minimum. Instead, he opts for laid back, restrained camera angles, letting the actors, action and scenery spur on events and take centre stage. The similarities to John Carpenter films are uncanny, but Cornish is bold and defiant enough to put his own mark on the creature feature genre.

The alien effects are almost entirely practical, and are exposed magnificently through abrupt snatches of ruthless imagery that’s reminiscent of several cult-classic horror films, including An American Werewolf In London and Ghostbusters. Their rugged design is blazingly original, making them undeniably more figurative than most mega-budget Hollywood beasts. A few subtle CGI enhancements add visceral gloss without ever ruining the authenticity of the aliens and supplementary gang war.

The cast, which is splendidly comprised of three known UK actors – Whittaker, Nick Frost and Luke Treadaway – alongside a smorgasbord of unknown teenagers, are uniformly top-notch. Frost delivers an over-the-top yet wonderfully humorous turn as Ron, Whittaker plays Sam with a captivating naivety and earthiness, and Treadaway brilliantly captures the personality of a posh stoner. Meanwhile, John Boyega stands out from amongst the unknowns, giving a powerful and genuinely unnerving performance as Moses.

The casting itself gives the film an extra layer of realism, as most of the actors were handpicked from council estates and youth clubs around London. Moreover, the willingness to address many current questions about war, racism, and violence in today’s society allows the film to remain level headed and appealing to a wide viewership. It’s unlikely to leave many feeling unimpressed or unaffected.

All in all, Attack The Block is a thoroughly entertaining, truly original, strikingly executed and – in my opinion – instantaneously classic British sci-fi cross-breed. It’s a film that simply cannot be missed.