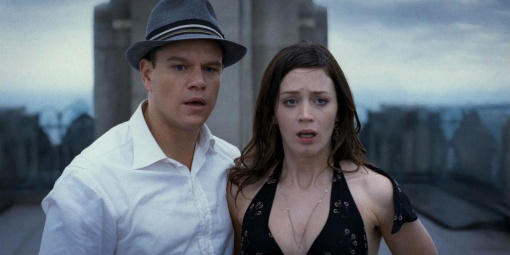 On the brink of winning a seat in the U.S. Senate, ambitious politician David Norris (Matt Damon) meets beautiful contemporary ballet dancer Elise Sellas (Emily Blunt) – a woman like none he’s ever known.

But just as he realizes he’s falling for her, mysterious men conspire to keep the two apart. David learns he is up against the agents of fate itself – the men of ‘The Adjustment Bureau’ – who will do everything in their considerable power to prevent David and Elise from being together.

In the face of overwhelming odds, he must either let her go and accept a predetermined path…or risk everything to defy fate and be with her.

Adapted from Philip K. Dick’s short story Adjustment Team, George Nolfi’s directorial debut has all the typical elements of a traditional thriller, but instead –  and to its merit – shifts focus onto the sincerity of its love story, the intensity and sting of its dialogue and the poignancy of its two lead characters.

Nolfi’s script is compellingly light on its feet, merrily skimming over any laboured exposition on the deep, underlying questions in an old-fashioned Hollywood way; and there’s a wonderfully pleasant, authentically believable echantment between Damon and Blunt.

Visually, the film is stylishly shot by John Toll. The sumptuous New York backdrop is bathed for all its worth, resolving the action sublimely with a peerless top-of-the-world, eloquent climax, thanks in no part to the pulsating score and symbolic use of natural lighting through mise-en-scène.

In terms of drama, The Adjustment Bureau doesn’t quite set all lights blazing, and the overall story lacks in the kind of gut-wrenching twist or moment of pathos that would propel it to a higher stature. But in no way shape or form does this infringe upon the overall point of the film – the sincere, clever and unique romantic nature.

The heart of the film, and the films most impressive element, is the plausible relationship between David and Elise, so exquisitely played by Matt Damon and Emily Blunt, who both exude a captivating level of warmth and naturalism that makes their potentially life-threatening romance instantly credible and captivating to behold.

Damon sturdily channels David’s bruised side, contrasting this with his level-headed political disposition, giving an extraordinarily full-bodied, comprehensive performance, one that will undoubtedly be shamefully overlooked.

And Blunt, in arguably her most enthralling role since The Devil Wears Prada, undercuts Elise’s cutting, untrustworthy exterior with her honest, vulnerable inner heart to perfect, pertinent avail. Her ballet skills may not be the best, but she more than makes up for that in other, more necessary areas.

The Adjustment Bureau is a fun, thought-provoking uniquely discerning and superbly acted entertainment romance-thriller. Unlike the marking campaign suggests, it isn’t Bourne meets Inception, but it does have the necessary ingredients to stand out as a solid piece of filmmaking.