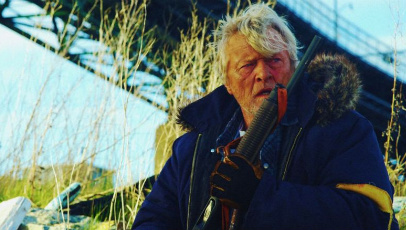 Hobo With A Shotgun is a feature-length adaptation of the highly successful fake trailer made for Quentin Tarantino and Robert Rodriguez’ Grindhouse, and stars Rutger Hauer, Pasha Ebrahimi, Robb Wells and Molly Dunsworth.

The film centres on a homeless vigilante, Hobo (Hauer), who finds himself trapped in urban chaos. He is surrounded by armed robbers, corrupt cops and even a paedophile Santa. Hobo decides to bring about justice the best way he knows how – with his trusty pump-action shotgun.

Screenwriter John Davies litters the film with throwbacks to 1970′s horror, while conserving a gleeful level of originality and satirical humour into the oft-told one-against-the-world tale. It does wonders to keep viewers on the edge of their seats, and thoroughly entertained throughout. While the premise is a tad sketchy, the scenarios that derive from it – murderous dodgems, a torturous pinata, and the aforementioned unorthodox Santa – certainly aren’t.

Jason Eisener, who opts for practical effects over digital CGI, manages to balance a realistic feel with over-the-top, cartoonish, and incredibly gory violence. He indulges in frenetic cinematography, glorified lighting and a stomping soundtrack to boot, all in keeping with the exploitation genre and the films to which he is paying homage.

The choice to recast Hauer as the Hobo was one of utter genius, and he plays it with effectively straight assurance, keeping the film grounded amidst the hysteria. The supporting cast, a smorgasbord of unknowns and ex-TV stars, helps further to instil and sustain the feel of an authentic exploitation flick – something that previous studios’ efforts have failed to capitalise on.

Dunsworth – a prostitute and Hobo’s unimaginable foil, Abby – stands out amongst the supporting cast. She does tremendously well with a severely underwritten character, providing a brilliant antithesis to Hobo’s ruthlessness. They have a sizzling chemistry on-screen, and a subversive, darkly amusing rapport that feels extremely gratifying.

It’s clear Eisener has an eye for the schlock genre and, by letting his imagination run wild, Hobo With A Shotgun emerges as a sure-to-be perennial, shockingly violent and wonderfully clever yet purposely screwball modern-day vigilante thriller. It’s “bloody” terrific fun.