In this doubly preposterous and cut-price sequel to Olympus Has Fallen, Gerard Butler returns to punch, stab and shoot his way through the destruction in order to get the President of the United States (Aaron Eckhart) to safety once more as no-nonsense Secret Service agent Mike Banning. This time, the action has relocated to London, where heads of state from around the world have converged for the Prime Minister’s funeral. END_OF_DOCUMENT_TOKEN_TO_BE_REPLACED 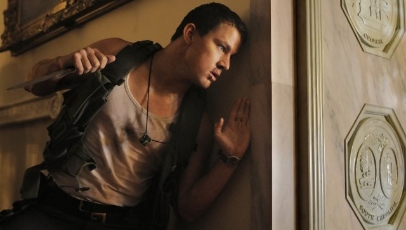 After briefly sidestepping into more artsy territory with the widely panned Anonymous, Roland Emmerich comes back full force with White House Down, an over-the-top explosion-fest that flopped spectacularly upon its release in America. It’s dumb and predictable, sure, but unlike Olympus Has Fallen, this year’s other White House-set Die Hard parody, White House Down embraces its ridiculousness – a feat that mostly works in its favour. END_OF_DOCUMENT_TOKEN_TO_BE_REPLACED

After years of being miscast in laughable rom-com’s opposite such talentless faces as Katherine Heigl, Gerard Butler rediscovers his calling with Olympus Has Fallen, a performance that reminds us of why he broke out in the first place. It’s a shame, then, that the film itself doesn’t match up to its stars surprisingly shipshape standards, often falling short to cheesy dialogue, annoying patriotism and an overstretched running time. END_OF_DOCUMENT_TOKEN_TO_BE_REPLACED