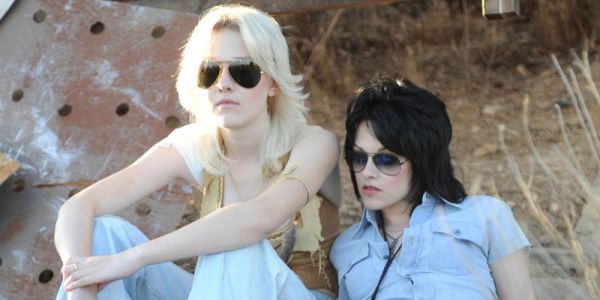 The Runaways, although heavily advertised around Kristen Stewart’s uncanny resemblance to Joan Jett, centres upon Dakoka Fanning’s turn as Cherie Currie and her sudden rise to fame in the first all-female rock group, The Runaways.

Fanning, now a 16-year-old, embodies the reckless character with sheer determination and passion, distancing herself greatly from her childhood roles in such films as Charlotte’s Web and The Cat In The Hat, whilst cementing her transition from childhood sweetheart to a grown-up, serious actress.

Stewart, with her almost uncanny resemblance to her character, takes on the role of Joan Jett, proving to audiences and critics alike that there’s a lot more to her than weak, moody character of Bella from the Twilight films.

In terms of supporting cast, it has to be noted that Michael Shannon fits the role of Fowley perfectly, verging on the brink of total insanity, while Stella Maeve, Scout Taylor-Compton and Riley Keough all give strong performances as the other members of the band.

Floria Sigismondi displays true potential with her particular style of cinematography and attention-to-detail, framing the action beautifully, illustrating the growth both lead characters experience with a sense of ambiguity, which helps keep the film light-weight, and it’s all the best for it.

The Runaways may not be one of the best biopics ever made, but it gives a fun, electric and gritty glimpse into the lives of a group of five teenagers being rocketed to fame in the first female punk band.