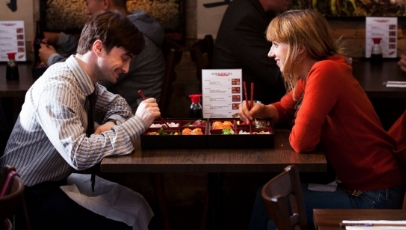 Daniel Radcliffe continues to stretch his capacity in Michael Dowse’s What If, a smart and funny rom-com that puts a modern spin on the age-old topic of whether men and woman can merely be friends. At a party, Wallace (Radcliffe) meets Chantry (Zoe Kazan), an animator with a similar sense of humour and a long-term boyfriend. Determined not to let their connection pass them by, Wallace and Chantry agree to be friends – an understanding that proves difficult to maintain.  END_OF_DOCUMENT_TOKEN_TO_BE_REPLACED

Having achieved meteoric success at the tender age of eighteen, Calvin (Paul Dano) is now plagued with writer’s block and unable to move past his own self-doubt, relying all too heavily on his therapist, Dr. Rosenthal (Elliot Gould), and assertive brother, Harry (Chris Messina), for direction. In a desperate attempt to kickstart Calvin’s creative flow, Dr. Rosenthal implores him to write about a fantasy scenario as if it were true; and so Ruby Sparks (Zoe Kazan), the lively END_OF_DOCUMENT_TOKEN_TO_BE_REPLACED 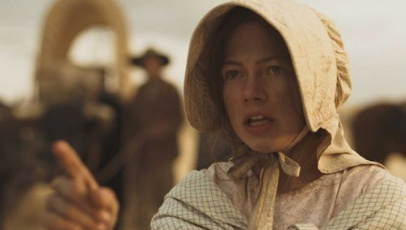 The film follows a group of settlers, traveling through the Oregon desert in 1845. When they find themselves stranded in this harsh environment, they capture a lone Cayuse Indian in the hope he will lead them to water.

The style is austere, minimalist even – for long passages there’s no dialogue, and Jonathan Raymond’s meandering, prudent script deflects traditional narrative conventions, instead shifting focus onto the characters, letting their arguments and troubled minds drive the narrative.

The languid pacing not only begs us to contemplate the characters’ world, but also allows us to further enjoy the visual poetry in the lingering and extraordinary camerawork.

Reichardt’s direction is sublime, carving a distinctive and atmospheric tone that compliments the passive narrative perfectly. With the help of cinematographer Chris Blauvelt, she’s able to indulge in some extraordinary panoramic shots, using the landscape as a mirror for the characters’ hopeless trek.

The restricting format Meek’s Cutoff is filmed in, and the very little music used, gives the boundless desert a distressing claustrophobia and repetitiveness. These factors all exquisitely add to the almost frightening atmosphere, and highlight the apparent feelings of alienation, isolation and loneliness that taint the weary travelers.

Michelle Williams’ performance is a tour de force. She is tremendous in her role as the strong-willed Emily. It’s clear she feels comfortable with the material, and Reichardt extracts the best in her, rivalling her award-nominated turn in Derek Cianfrance’s Blue Valentine.

Kazan and Henderson are respectable as the films key supporting acts, both responsible for the films timid yet slick comic interludes.

Perhaps the only problem is how underused and underdeveloped the male characters feel. The men are theoretically in control of their female companions, but they are never given enough screen time for this idea to develop, or for their characters to truly flourish. Dano, Patton and Greenwood are all fantastic actors, so it’s a shame to see their involvement so mishandled.

Meek’s Cutoff is a beautifully evocative, sophisticatedly directed, and astonishingly acted portrait of life on the Oregon Trail.