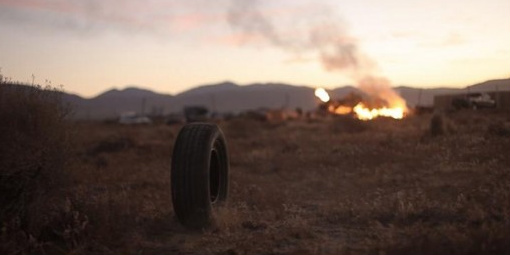 Rubber revolves around a tyre, Robert, that’s been buried and forgotten in the middle of the desert. When, for some unknown reason, Robert wakes up and discovers his destructive telepathic powers, he soon sets his sights on a desert town; in particular, a mysterious woman who becomes his obsession.

The film, an ode to 1970’s experimental filmmaking, serves as a wonderful social commentary piece of film by not only playing on the typical conventions of commonplace horror films, but by bravely eradicating the “fourth wall” by establishing a subplot of spectators watching the action through binoculars; essentially a film within a film.

The script is solid, and the humour builds on itself in tiers, sprouting from the perplexing moments of hilarity to the ludicrous crescendo of the conclusion, where every element of the film comes together in an ending that, if nothing else, will make sure you never look at a supposedly inanimate object the same ever again.

Jack Plotnick, especially, exhibits the uncommon talent to carry a scene from laugh out loud humorous to acutely afflicting in a matter of seconds, delivering his lines in a magnificent, whimsical style.

Mr Oizo’s soundtrack compliments the on-screen action sublimely and, by working in unison with the excellently lingering, often intentionally off-frame cinematography, builds up and up as Robert, a rolling tyre, is made into the main character, one displaying wholly human characteristics, a feat that’s rarely achieved so distinctively.

Rubber is a uniquely screwy horror-comedy that supplies a fascinating blend of carnage and farcicality, moulding it into a striking romp that deserves to find its audience.