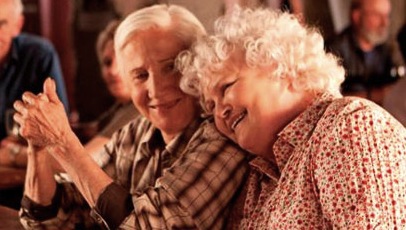 Kicking the proceedings off on Friday, March 23 is Cloudburst, a touching comedy drama starring Olympia Dukakis and Brenda Fricker. Directed by Thom Fitzgerald, Cloudburst centers on a lesbian couple who escape their nursing home in order to get married.

The festival will then come to a close on Sunday, April 1 with a special screening of Bavo Defurne’s North Sea Texas, about how a teenage boy’s search for love finds him obsessed with the boy next door.

In terms of events, the BFI will host Q & A sessions, exhibitions and a showcase from the Pink Dancers, a lesbian and gay ballroom dance troupe.

For the full line-up of screenings and special events (available now), and all the information you need on how to book tickets, head over to the festival’s official website.